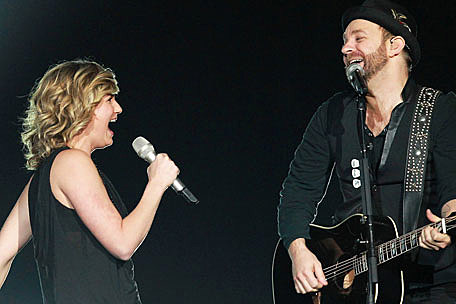 It's always a disappointment when you get to a concert and the artist doesn't play your favorite song. Well, you will get a voice when it comes to Sugarland's 2012 In the Hands of the Fans tour, which kicks off in April. (See a full list of stops below.)

"This year's tour is based around the concept of putting the show into the hands of the fans," says the duos' Jennifer Nettles. "They will make the requests that will help form the set list and guide the show. Through texts, handwritten signs, the Internet (Twitter, Facebook, etc.) phone calls made during the show and selections directly from the stage, the fans will become the conductors as well as the audience. If it's on one of our records or if we've played it on a stage it is fair game."

Lauren Alaina and newcomer Canaan Smith will join the duo on select stops of the 25-plus date tour. Details regarding how to request the Sugarland set list will be coming soon here.

Sugarland's In the Hands of the Fans Tour Dates: