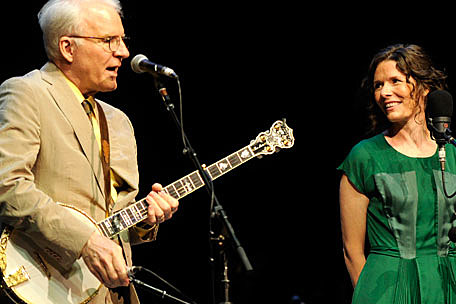 It's a pairing we would've never dreamed of, yet one that makes perfect sense. Legendary comedian and bluegrass great Steve Martin has teamed with folk-pop icon Edie Brickell for a new album, Love Has Come for You, which will hit stores April 23 via Rounder Records.

The 13-track project is said to boast rootsy, nostalgic songs that deliver vivid imagery through lyrical character studies. Each song combines the lauded banjo playing of the IBMA's 2011 Entertainer of the Year with the "What I Am" singer's unique vocals. "I fell in love with the banjo tunes because at first listen, they evoked images and stories that were true to me," says Brickell of the pairing.

"The banjo can be so evocative when it's used sparingly, and that was in the back of my mind as we were writing," says Martin. "It's the way I've longed to play and hear the banjo, rather than it being present at every moment. In these songs, the point is to tell the story and get out."

Martin and Brickell are planning a tour in support of the album, with dates to be announced soon.