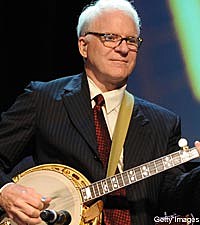 The success of Steve Martin's 'The Crow: New Songs for the Five-String Banjo,' (it won a Grammy and spent 31 weeks at No. 1 on the Billboard bluegrass album chart) must have gone to the entertainer's head. He plans to join his touring group, the Steep Canyon Rangers, in the studio in August to record a second album which he says will be "a little more blue grassy" and will once again focus on newly-created music.

"There's no point for me not to do original compositions," Steve tells Billboard. "What do I do -- cover somebody else's song? That's ridiculous. They could get a better singer to do it. The only contribution I could make, really, is in the writing. And sometimes I think I'm at the limit, 'I can't write another song!', and then I go on vacation and pick up the banjo and write two songs."

The 64-year-old actor-writer-musician-comedian has already started previewing some of the new material at his live dates including 'Jubilation Day,' which, he says, is a possible title track for the new album.

"I couldn't be happier," says Steve. "To go from my living room saying, 'I think I'll do an album' to winning a Grammy is very exciting. And you have to remember it's a banjo record, so it's a little bit puzzling. I don't think it's selling on my name at this point; I think it's selling on the music ... which makes me proudest of all. I deeply believe in this music and the musicians. They've been very kind, and they seem appreciative that the music is ... reaching an audience that the bluegrass world doesn't usually reach."

And of course, as a professional comedian, Steve deftly combines his love of the banjo with his flair for humor, telling one audience recently that he appreciates the instrument's "elements of sadness and melancholy -- like the expression on my agent's face when I told him I wanted to do a banjo tour."

As for the new music, Steve teases, "I'm going to write a song called 'Women Like to Slow Dance' but we're going to make it really fast."

Steve starts a new tour April 19 in Detroit and will play the Bonnaroo Music Festival on June 11 in Manchester, Tenn.