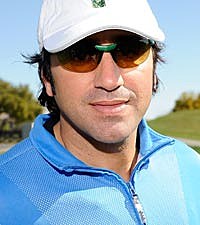 Steve Azar's latest single 'Sunshine' may sound familiar to those who caught the singer out on the road when he was opening up for the legendary Bob Seger a few years back. The song was penned in the midst of that tour during soundcheck one afternoon.

Soon after finishing the beautiful and tender ballad, Steve began working it into his set each night. "The room would get dead silent when we would play it. It was sort of hypnotic," Steve tells The Boot. "I know one thing ... it put me in a place where I would get dizzy onstage a little bit. It put me in a trance."

After forming his indie label, Ride Records, Steve recorded 'Sunshine' and put it on his 'Slide on Over Here' album which was released last year. After much positive feedback on the tune, Steve made the decision to release 'Sunshine' as the album's second single.

"We spent three or four months really setting it up. This song has gotten the opportunity that a lot of my songs in the past just have not gotten," Steve explains. "You need to have all cylinders going at one time. Sometimes it's not all perfect opportunities, and that takes a lot of work. It's a blessing to be able to work on something I love. You fight for it. Our team has started on the one-inch yard line with 'Sunshine,' and it's in the 20's on the [country singles] charts."

Steve says he and his team are continuing to work hard for the single to keep the momentum going strong. "If we were a big label right now, this song would be in the stratosphere, but we're a small label with a lot of stories about a song. 'I Don't Have to Be Me ('Til Monday)' didn't have 50 of the stories that are attached to 'Sunshine.' That's what's really helped this thing go. We've had 10 [radio] stations across America say it's been the most requested song in their history of the station. It's those stories that have really helped us work through a lot of obstacles, climb over walls, bust through them and work our way around them. It still has a long way to go."

Steve says 'Sunshine' is a relationship song that can appeal to just about anybody, and it has, everywhere he goes. "[The opening line is] 'your dark hair draped across my pillow says I finally got it right,'" he says. "The 'finally got it right' has meant so many types of relationships. It's not just about a couple; it's about a father and a daughter. It's about best friends. It's about long relationships or relationships that may be around the corner or that are brand-new. The journey represents the struggle to know it's there or to find it. It's everything that you've felt like's been missing and the mistakes you've made. The song is in present tense in the beginning, but the rest is about everything you never had or everything you realized you didn't have. Maybe it's just around the corner for those who don't have it. We wanted the journey to represent the struggle to find it and to know you've got it. I know this song is not going to change the world, but it has mattered to a lot of people."