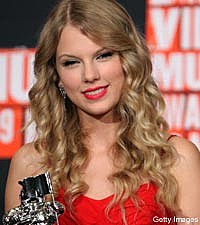 The No. 1 topic on Twitter Sunday night was, of course, Kanye West's rude antics at the MTV VMA Awards. And everyone is on Team Taylor. Here are a few of our favorite "tweets" from country stars:

"Poor Kanye. so shy, so humble, such a class act. why doesn't anyone like him? I mean come on! Just kidding of course - he's a total ass." -- Brad Paisley

"Sorry y'all but we're just a little bit protective of Taylor Swift around here!! Hey Kanye.. By around here, I mean the world!! Moron...." -- Blake Shelton

"Kanye West is the classic case of a guy who never got his &#@ kicked as a kid! You give the rest of us a bad RAP!" -- David Nail

"Tator Tot, you handled yourself with grace. Kanye, go grow some f-ing balls b----! don't mess with my lil sis!" -- Kellie Pickler, who later tweeted, "I apologize for my language, I'm just f-ing pissed."

"Pretty much would love to get redneck on Kanye's ass right now. Classless." -- Randy Houser

"Taylor Swift won me as a fan for life for her grace, as did Beyonce...humility and a humble spirit go a long way in this life and the next." -- Rissi Palmer

"Kanye when're you gonna figure out you're NOT the "voice of our generation?" No one thinks you're as awesome as you're convinced you are." -- Love and Theft's Brian Bandas

"Kanye West. Is anyone surprised? It's a character issue. His is deeply flawed. He's made an ass out of himself many times." -- James Otto

"I wish I would have won an MTV VMA. Kanye would be missing some teeth if he pulled that s--- on me." -- Joe Nichols 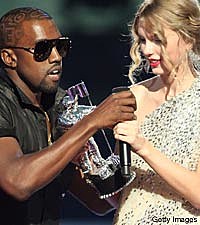 "Let's invite Kanye West to the CMAs and see how long he lasts!" -- CMT's Katie Cook

"It's not like HE could have won Female Vid. Though maybe he could have, since now we see he wears panties and they were in a wad." -- CMT's Lance Smith

"Tell Taylor I will take a pic after I run over Kanye and leave scooter tracks on his face!!!" -- Two Foot Fred

"You can't steal Taylor Swift's thunder. He only made himself look like an a**" -- Jewel

"Kanye West should be banned from all music events. How disrespectful!" -- Diamond Rio

"Like school in the summertime -- no class." -- Michelle Branch

"My heart goes out to Taylor Swift. She is a sweet and talented girl and deserved her moment. She should know we all love her." -- Pink

"Dear Kanye, What happened to you as a child?? Did you not get hugged enough?? ... We're all just curious as to what would make a grown man go on national television and make a talented artist, let alone teenager, feel like s-. I mean, I've seen you do some pretty s-ty things, but you just keep amazing me with your tactless, a--hole ways. It's absolutely fascinating how much I don't like you. I like everyone. I even like my a--hole ex that cheated on me over you ... The best part of this evening is that you weren't even up for THIS award and yet you still have a problem with the outcome. Is winning a moon man that much of a life goal?? You can have mine if it will shut you up ... I was actually nominated in the same category that Taylor won and I was excited for her ... so why can't you be?? I'm not even mad at you, I just pity you because you're a sad human being ... Taylor Swift, you outsell him, that's why he's bitter. You know I love your work! Keep it up girl!" -- Kelly Clarkson (via her blog)