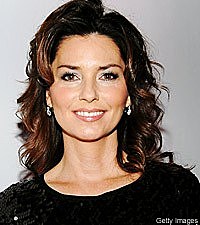 It was two years ago that Shania Twain had her heart broken, after allegedly discovering that her husband of 16 years, rock producer Robert 'Mutt' Lange, was having an affair with one of her closest friends. Scooping up their son, Eja, who was six at the time, Shania quietly left Switzerland to settle back down in her native Ontario, Canada and put her life back together.

According to official documents filed this week in Switzerland, Shania is now a legally divorced woman, PEOPLE magazine reports. But that doesn't mean the brunette beauty is back on the market. Shania is very much in love, in an ironic twist of fate, with the other scorned party in the alleged affair -- Frederic Thiebaud, whose ex-wife is the friend accused of having an affair with Mutt. Shania was reportedly looking "radiantly happy" when she appeared at the Swiss Red Cross Ball on May 29 with Frederic, who has been a strong and constant support at her side these past couple of years.

"Her happiness certainly shone through," says the singer's friend Stéphane Lagonico, an ambassador for the Swiss Red Cross, who organized the ball. "They are a great addition to each other's lives."

Shania has been preparing to shoot her new series, 'Why Not? With Shania Twain' on the Oprah Winfrey Network. There has also been some talk that 'American Idol' may be courting her to be a judge next season, following her successful stint as a mentor this season.