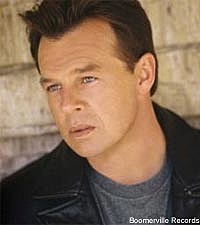 Sammy Kershaw, who has been active in country music since 1991, has released ten studio albums (three platinum and two gold). He's had more than 25 Top 40 country singles, including the No. 1 'She Don't Know She's Beautiful' and Top 10 hits, 'Cadillac Style,' Anywhere But Here,' 'Haunted Heart' and 'Queen of My Double-Wide Trailer' among them.

We caught up with Sammy at his home in Louisiana, where opened up about everything from the ups and downs of the music business to his four wives, bankruptcy and much more.

I read that you once said you can't sing a song unless you've lived it. Which song have you recorded that you relate to the most?

I guess it would probably have to be 'Yard Sale.' Man, I've been married four times.

'Yard Sale' was about a broken marriage and selling off lots of personal stuff. How many yard sales have you had?

Last year you filed for bankruptcy? Are you doing OK now?

Your singing style has been compared to George Jones'. Your voices are incredibly similar. Are you flattered or annoyed by the comparison?

Love it! You know if I were a baseball player, and I was compared to Mickey Mantle, it sure wouldn't make me mad. Being compared to the greatest country soul singer that ever lived sure don't hurt my feelings.

What's the hardest part about being in the music business?

I guess the hardest thing that I've gone through with this business is I missed my children growing up because I was gone so much. My third wife really raised my children and did a hell of a job. I have great kids but I was gone all the time so I can't really take all of the credit for having great children. I have to give credit where credit is due and that's my ex-wife Kim. Emily is 15, Erin is 22, she just enrolled in law school, Ryan is 28 -- that's Kim's son but he was with me since he was one-and-a-half years old -- he's my boy really, then Sammie, my oldest daughter, is 31 and my oldest son Brandon is 33.

What are you afraid of?

Finish this sentence: I have no tolerance for...

People that lie to you. I can't stand it. I don't like people to stand there and lie to me knowing that they're lying. It just kills me. Liars and users -- I don't have any use for people like that. It's kind of sometimes bad for me being so damn honest and tell it like it is, but I'm one of those guys when something happens I have to tell it like it is right then, and as soon as I do, it's over. It's never thought about again for me. I'm not a guy to carry something on for years and years. When something happens I address it right then. I let everybody know where I stand, and then it's over for me. Of course a lot of people pin you an a--hole. I'm not an a--hole, I'm just honest. You like it or you don't. I don't like to be an in-between guy. I don't like gray areas. You either like me or you don't like me. I don't want people to say, 'He's OK.' I don't want to be a person like that. They either love me or they hate me.

Have you ever wanted to say: "Take this job and shove it" to anyone?

Oh, I've had plenty of those. Starting music in nightclubs at 12 years old, and having that dream in my heart and soul and my gut for so long that I learned how to do all kinds of different things to keep that dream alive. I've had some awful damn jobs ... dirty, nasty jobs that I didn't want to do but I had to do to be able to continue playing music when I wasn't making but maybe 40 or 50 dollars a night. Yeah, I've had plenty of those.

If you could go back in time and spend one week with either Elvis Presley or Marilyn Monroe, who would you pick?

Golly, both of them for different reasons if you know what I mean. [Laughs] Hot dog, both of them will never die. They'll both live forever and ever and ever. I think I would have to say Marilyn Monroe because of the way she died. You know I've been through the alcohol and drug thing in my life. At one time really, really bad. But I quit all that stuff about 27 years ago even though there's some people I see sometimes on the Internet saying things like I'm nothing but a drunk and a druggie -- they don't know what the hell they're talking about because I haven't done drugs or drank in 27 years. But I guess it would have to be Marilyn because I'd want to try to understand why she did it. Because I know I'm one of the lucky ones in life because I was able to wake up one morning and say that's it and flushed all the drugs and alcohol down the toilet, and that was it. It was over. It never bothered me again from that moment on. Some people aren't' that lucky. I don't know what it is. It's just like cigarettes. That's probably the worst drug I've ever done in my life. I've tried so many times to quit, and I know I need to quit but it's just something that's got a hold of me and won't let go.