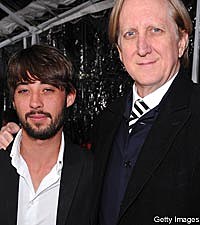 In the opening of the new film, 'Crazy Heart,' Jeff Bridges' character, dissolute country singer Bad Blake, is on the downhill slope of a long career, playing such soul-sucking gigs as a bowling alley.

Even though Ryan Bingham is a good 30 years younger than Blake, the singer/songwriter admits he can completely relate to such humiliating circumstances.

"Oh man, I played a NASCAR pep rally one time in Ft. Worth, Texas," he tells The Boot. "People were showing up in Budweiser pajama pants. They had cardboard cut-outs of Dale Earnhardt Jr. and people were getting in fist fights over these cardboard cutouts. I was like, 'Where am I?'"

Where Ryan is right now is on the fast track to stardom. On Dec. 15, the Lost Highway recording artist received a Golden Globe nomination for 'The Weary Kind' -- the theme to 'Crazy Heart,' which he co-wrote with legendary producer T Bone Burnett. Now there's building Oscar buzz.

Ryan knew he wanted to be involved with 'Crazy Heart' immediately after reading director/writer Scott Cooper's script. "The song just came out and kind of described [who] was this character. I [thought], 'Man, this guy is Townes Van Zandt, Kris Kristofferson, Waylon [Jennings] and Willie {Nelson]'; all these guys that I've looked up to for so long."

For T Bone, Bad Blake is his friend, Texas troubadour Stephen Bruton, who co-wrote a number of songs for 'Crazy Heart' before dying of cancer earlier this year.

"My first call after we first found out we were going to do this movie was Stephen," says T Bone, who produced 'Crazy Heart,' composed the score with Stephen and co-wrote many of the songs. Just like Bad Blake, "the last five years of his life, maybe longer, [Stephen] was driving around in a Suburban [to gigs] with a Sparkletts bottle" to -- as Blake does -- relieve himself.

T Bone and Stephen grew up in Texas together, meeting when they were 14. The praise now being heaped on 'Crazy Heart' is bittersweet for T Bone since his friend is no longer here. "With every new accolade that comes in, there's a tremendous amount of pain associated with it because Stephen's not there to accept it," T Bone says. "For him to get to this point now where his songs are going to see the light of day and his work is being appreciated, it's tough. I'm really sorry to see that he's not here to be with us for this ride."

It's a ride that almost never got out of the stable. 'Crazy Heart' looked to be headed straight to home video after its initial theatrical distributor Paramount Vantage shuttered. Eventually, Fox's art-house division, Fox Searchlight picked up the film.

T Bone gathered fellow song scribes Stephen, Ryan and John Goodwin, to pen the nine original songs in the film. Jeff does his own singing in the movie (as does Colin Farrell, who plays Bad Blake's protégé Tommy Sweet). The inspiration for Bad Blake's singing style seems an unusual one.

"The first person I brought up was Leonard Cohen," T Bone says. "Jeff has a deep chest voice so it was obvious that he couldn't sing in that normal Nashville [way]. To try to turn him into a Nashville country singer clearly wasn't going to work. Don Williams has the kind of voice that Jeff has." Cohen entered the picture as the kind of musical poet that Bad Blake aspired to, but, despite his commercial success, never approached his critical acclaim. "That was a big disappointment for him," T Bone says.

Gathering around the table with T Bone and the other writers was educational and inspiring for Ryan. He says he's still learning from T Bone and the two are now talking about making an album together. "He [talks] about being honest with your music and your songs, sticking to what you know and believe in," Ryan says. "Music kind of chooses you, in a way. I always say it's kind of like music has me by the hair dragging me down the road."

Surrounding himself with these elder statesmen as his career jumps to a new level comforts Ryan. "Especially at this point when a lot more people are getting interested in my songs, it's like, man, I need some help," Ryan says. "I need some people to look up to right now and give me advice on what's going on because this is all really new to me."

It's too early to tell if the soundtrack to 'Crazy Heart,' out Jan. 19 on New West Records, will turn into the sales or radio phenomenon experienced by another T Bone project, 2000's 'O Brother, Where Art Thou?' which won the Grammy Award for album of the year.

"Country radio is a different animal," T Bone says. "Anything could happen as we found with 'O Brother,' but [radio] wouldn't play 'Man of Constant Sorrow' for a year. The record has already sold eight million [copies] or something like that and then they started playing it."

Ryan isn't looking that far ahead; although he jokes that he is already pondering his Oscar Awards attire, should 'The Weary Kind' be nominated. "I was hoping that me and Colin Farrell wore the same size clothes and maybe I could borrow some stuff from him," he laughs. "He's got cool threads. T Bone is a little too tall."