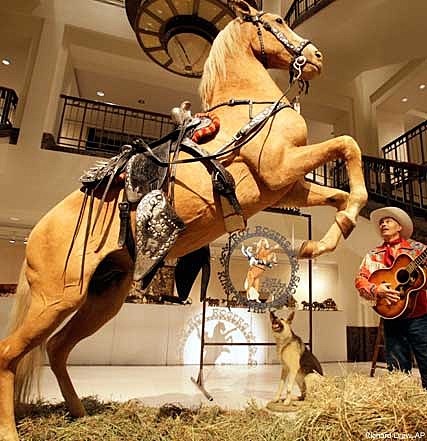 Roy Rogers' beloved horse Trigger has more 'Happy Trails' ahead of him in Omaha, Neb.

The horse that Roy rode into the sunset in many western-themed movies has been sold for $266,500 to a business man who owns a rural-themed cable network, according to CBS News. The sale was made as part of a two-day auction of items held by Roy Rogers, Jr. It was what a spokesperson for Christie's auction house says was the "most colorful, emotional and sentimental" sale she's experienced in her 20 years with the firm.

As fans know, Roy Sr. had the palomino -- that was never bred and left no heirs -- stuffed and displayed after it died at age 33 in 1965. Trigger, who some call the most famous horse ever to appear in films, could perform countless tricks on cue and many claimed it could walk 50 feet on its hind legs.

Youngsters who watched Roy and Trigger in the movies and later on 'The Roy Rogers TV Show,' which aired from 1951 to 1957, knew Trigger as well as the signature song of Roy and his wife Dale Evans, 'Happy Trails.'

Among the more than 1000 items Roy Jr. put up for auction included the following, according to Christie's:

Roy, known as "King of the Cowboys," is the only person ever inducted twice into the Country Music Hall of Fame. He was inducted in 1980 as a member of the original Sons of the Pioneers group. In 1988, he was again inducted as a solo artist.

The couple's eldest son, Roy (Dusty) Jr., is a singer who often performs in Branson, Mo.