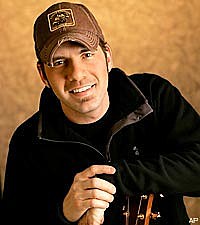 Rodney Atkins is accustomed to fans running up to him, either to ask for an autograph or to simply shake his hand. But when the tables are turned, he has a better understanding of what fans feel when they meet him for the first time.

"It's still a trip for me to see somebody that I've only seen on television or in a movie," the singer admits to The Boot. "When they are there in real life, it's very different. When we played Detroit, Kevin Coster played before us."
Played before him. Rodney pauses, as if to let that thought sink in again. "He opened for us, which was very surreal. I was standing there talking to him, and all the time we're talking I'm thinking of the movies he's done that are a part of my life."

Rodney says he tries not to freak out when he meets someone, or when he's talking to them. "Usually they're friendly, down-to-earth folks," he points out. "When I did ''The Tonight Show' and Jay Leno was still there, he was very nice but it was surreal. It's like you can't believe you're standing there talking to that person. If you've seen them in a lot of movies or on TV you feel like you know them, just like my fans feel like they know me."

The singer says, however, that fans can sometimes go too far, raising the issue of safety for himself and his family. "You try not to let it jade your kids that everybody's crazy because they're not. Most people are regular and view you [as] a regular guy trying to raise a family. But you do have to keep your guard up."

Rodney also wants his kids to understand that their dad being a singer is just like someone else's dad being a carpenter or a doctor. "If I thought for an instance that having Elijah or the girls, Lindsey and Morgan, in a video would make them think [they're] cool or superior or whatever, I'd never do it. Not only do I want them to see that I'm out there playing music, but I want them to see the stuff about me being on the National Council for Adoption. You can't sit at home and not do anything and think you're an example for your kids."