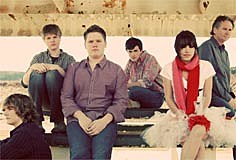 If Rockin' Acoustic Circus doesn't sound quite like the name of your typical bluegrass band, that's because they're anything but. Mixing musical influences and bridging generations but all the while building their unique sound with traditional bluegrass instruments, the Oklahoma-based group features veteran guitarist Rick Morton at the helm. A retired fire chief, Rick's impressive country-music cred includes winning a national talent contest with Ronnie Dunn not long before Ronnie went on to superstardom with partner Kix Brooks as Brooks & Dunn.

Rick played fiddle on tour with Ronnie, opening for shows for Ricky Skaggs, George Strait and Kathy Mattea. In 1994, he joined the Tractors on their Grammy-nominated debut disc, which went on to sell three million copies. Before becoming part of Rockin' Acoustic Circus, Rick was an in-demand teacher of fiddle, guitar and mandolin, with several private students drawing inspiration from his expertise.

Among those students were two of Rick's fellow RAC members Sterling Abernathy and Eric Dysart. Sterling was nine when he began studying mandolin with Rick and Eric was just six years old when he began taking fiddle lessons. He has since been named three-time Oklahoma Junior State Fiddle champion.

Banjo player Carson Clemishire is another contest winner, while classically-trained cellist Emma Hardin has broken new ground by incorporating her instrument in the mix. Emma's younger brother, Zac Hardin, who is also classically trained, plays bass for the group.

At the recent IBMA (International Bluegrass Music Association) World of Bluegrass gathering in Nashville, the Circus showcased their expert musicianship and provided a few pleasant surprises with their choice of covers, as Emma warbled a bouncy version of Melanie's early-'70s pop hit, 'Brand New Key.'

As for what the future holds, Rick says, "This group works hard and is open to all styles of music. We don't discuss much about where it all might lead. If we consistently play great at each opportunity, then where we play and how far we go will take care of itself."

While the band is just beginning to surface, one of their upcoming shows will actually take them underground. The group is slated to play the Volcano Room at the Cumberland Caverns with Blue Highway, as part of the Bluegrass Underground series on November 27.

Check out more of Rockin' Acoustic Circus and their latest album, 'Lonestar Lullabye,' at the group's official website.