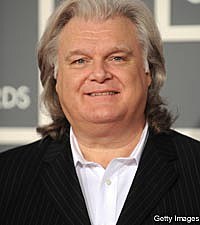 Ricky Skaggs has created a first in bluegrass history books. The legendary bluegrass musician has donated one of his G-runs to charity!

"That's the first G-run I've ever played in a jar," Ricky told The Boot. "I didn't know it would be so much fun to catch."

A G-run is a common bluegrass scale/lick, and it is virtually impossible to capture one. However, it's all in good fun and Ricky was happy to make the attempt, as all proceeds from the eBay sale goes to World Vision.

The idea was the brainchild of Wichita Rutherford, host of '5 Minutes with Wichita" on Sirius/XM Radio Network, who persuaded the singer to go through with the endeavor. Fans can bid on Ricky's G-Run here, in the eBay auction that closes Dec. 21. Early Friday morning, the lick was up to $170.00. There's also a cute video on eBay, documenting how the G-Run was captured.

Ricky recently released 'Ricky Skaggs Solo: Songs My Dad Loved,' which features the musician singing every note and playing every instrument, and tackling songs that his father began teaching him on mandolin as a three-year-old.

World Vision is a Christian relief and development organization dedicated to helping children and their communities worldwide reach their full potential by tackling the causes of poverty.