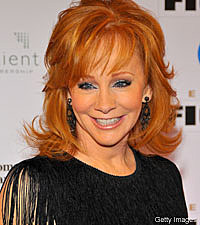 Reba McEntire has a tried-and-true philosophy when it comes to recording a new album. "I always try to find the best songs I can," she says.

McEntire is especially delighted with the songs she is recording for a new project, her debut on new label home, Valory Music Co. The country superstar has enlisted her old pals Tony Brown and Mark Bright to co-produce the project.

"I think getting to work with these two talented producers will just make the album twice as good," she says. "I hope the fans like the new songs and will be as delighted as I am with the project."

McEntire says she "always has a blast" with Brown, and she brought in Bright because she thinks it's important to listen to new ideas. "Mark brought in some great songs for me," she says. "He also brought in some studio musicians that I hadn't worked with before. I love the way he communicates with the musicians and I've really loved working with him."

McEntire's new single is expected this spring, with the full album to follow in the summer.