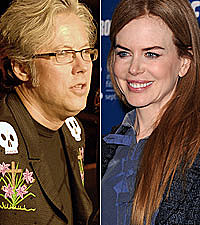 Radney Foster is enjoying another ride up the charts, thanks to Keith Urban's latest Top 5 hit, 'I'm In.' And according to Radney, he has Keith's own leading lady, Nicole Kidman, to thank for getting the song cut.

"She did that movie in the Outback ['Australia'] and they made up these compilation CDs while they were driving," Radney tells The Boot. The Oscar-winning actress, who had to ride in a car for eight hours to get to her film location, listened to several discs her husband gave her, and zeroed in on the Radney tune. "She said, 'Hey that's a really sexy song. You should do that song.' I owe Nicole Kidman flowers!"

Keith says he's happy to sing anything the prolific tunesmith writes. "Radney recorded an album called 'See What You Want to See,' that I heard and loved when I was recording 'Golden Road,'" Keith tells The Boot. "It's full of great songs. 'I'm In' is on that album, as is 'Raining On Sunday,' which I cut, 'Godspeed (Sweet Dreams)' that the Dixie Chicks cut, and 'The Lucky Ones' that Pat Green did. I said to Radney that my goal is to eventually cover every song on that album."

As for Radney, whose has seen his songs recorded by a long list of artists, including Kenny Loggins, Dierks Bentley, Jack Ingram, Gary Allan and Sara Evans, he's honored to find that they want to cut his songs even though he's not exactly a newcomer. "I'm just happy," he says. "This is a young man's business, and I'm just glad I still get to stick around and make a living doing it."

No word yet on whether Keith Urban's new album, 'Get Closer,' out November 16, will feature any of Radney's songs.