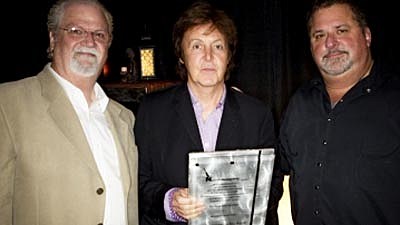 Sir Paul McCartney is recognized as one of the most successful songwriters in the history of popular music, and as such, his recent visit to one of the world's most important places for songwriters was accompanied by honorary induction into the Nashville Songwriters Hall of Fame. The presentation took place on July 26, prior to his acclaimed performance at Music City's Bridgestone Arena.

Roger Murrah, board chairman of the Nashville Songwriters Hall of Fame Foundation (pictured above, left, with McCartney and CMA board member/songwriter Bob Di Piero), presented the plaque. "We were honored to bestow on Music City's special guest, Sir Paul McCartney, an honorary induction into the Nashville Songwriters Hall of Fame." Roger said. "Creative exchanges constantly occur between music genres from around the world. In this way, Nashville songwriters have influenced Paul and, with his amazing body of work, Paul has certainly influenced Nashville songwriters."

"Paul's songs have always been an inspiration to me," said Kye Fleming, a 2009 inductee. "I still have my original 'Meet The Beatles' LP. It is in my office right now. I bought it when I was 13 ... coincidence that I started writing songs when I was 14? I don't think so! 'nuff said.'"

Roger tells The Boot that meeting Sir Paul at the special presentation was itself an honor. "Having been chairman for about five years, it was the most exciting thing I've ever done," he laughs. "The neatest thing that happened for me personally was when I was walking away after we had made the presentation and visited with Paul, he kind of hollered about the crowd, and said, 'Thank you Roger,' ... and in his own English accent, it was like 'Rawja.'"

"I was just thrilled that he acknowledged me and thanked me like he did," Roger continues. "He's been a big fan of several National Songwriters Hall of Famers like Boudleaux and Felice Bryant and Carl Perkins. Paul was a big fan of Carl. It's kind of like a complete cycle. They influenced Paul and Paul influenced so many of us. Someone made the comment that he just felt like one of us ... speaking of songwriters. He just couldn't have been more gracious and nicer."

After the presentation, Sir Paul became a little possessive of his award. "We offered to mail it to one of his offices or his home, and he wouldn't have it," says Roger. "He said he wanted to take it with him, and jokingly said, 'I don't trust you.' He wanted to be sure it left with him. He was characteristically joking around and enjoying the occasion. It meant a lot to him. He's very respectful of Nashville and has spent weeks here before on a [friend's] farm. He and [his late wife] Linda and the children rented it several years ago. So he loves Nashville and loves the musical heritage that we have."