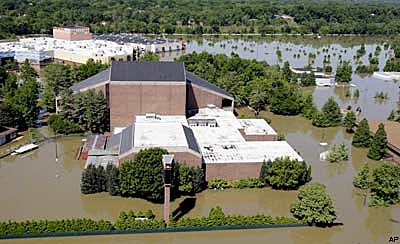 The devastating flood that has caused tremendous damage to homes and businesses in Nashville and Middle Tennessee, has also caused the Grand Ole Opry to relocate for upcoming shows.

Because several feet of water still remain in and around the Grand Ole Opry House, this week's scheduled Opry performances have been moved to other venues around Music City. On Friday (May 7) and Saturday (May 8) performances will take place at the Ryman Auditorium in downtown Nashville at 7:00 PM. Friday night's lineup includes Ricky Skaggs, Dailey & Vincent, Janie Fricke and more. Saturday's lineup will include newcomer Emily West and Lee Greenwood, among others.

The Grand Ole Opry House, home to the Opry since 1974, suffered damage as a result of the record-breaking rains and subsequent flooding in Nashville this past weekend. The last time the Opry had to relocate was in 1975, a move that was also caused by flooding from the Cumberland River.

"While we ourselves are shaken by the impact of the flooding of the Opry House and throughout the area, it is important that Nashville's most treasured tradition continues with this week's shows," says Grand Ole Opry Vice President Pete Fisher. "We look forward to coming together both as the Opry family and as a great American city just as we have every week for nearly 85 years. Our hearts go out to all of those affected in the Middle Tennessee area."

Updates on the Opry schedule can be found at the official Grand Ole Opry website. For more jaw-dropping pictures of the Opry flooding, as well as the flooding of several other Nashville landmarks, click here.