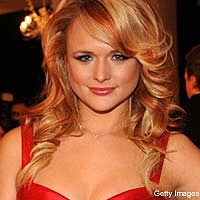 Miranda Lambert's 'White Liar' has climbed to the top of the country charts, marking the singer's first trip to No. 1!

The Texas beauty began celebrating in Bloomington, Ill., where she was opening for Brad Paisley on his American Saturday Night tour this weekend. She posted a photo on her Twitter page of a bottle of champagne and box of cigars and wrote, "Celebrate #1!!! First class all the way."

When writing the song, Miranda said she was listening to a lot of bluegrass music. "That kind of a vibe was kind of what I was into at the moment," explains the singer-songwriter, adding, "so 'White Liar' just sort of happened out of that ... what I had been surrounding myself with."

Next up for Miranda, besides more celebrating, is a turn as a presenter at Sunday night's Grammy Awards, where she is nominated for Best Female Country Performance for 'Dead Flowers.' Her date for the show? Her little brother, Luke, who recently turned 21.