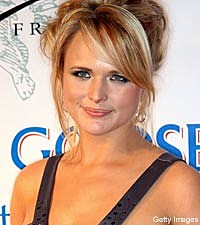 Miranda Lambert didn't have much of a choice when it came to shooting the music video for her single, 'The House That Built Me.' Anything other than the obvious storyline for the video would not have made much sense!

The song, featured on her current album 'Revolution,' takes the singer back to her childhood home as she rediscovers who she was as a young girl and is now as a woman."It's irritating how obvious videos are for certain songs sometimes," says the singer. "When they say 'little girl' and they show a little girl, and they say 'bicycle,' and they show a bicycle. And it goes with every word of the song. But this was one of those videos that needed to be really obvious ... [The director] found a house that looked a lot like the house I grew up in. There's no drama in the video. It just is what it is. It represents the song in such a great way."

The video, as well as the song, evokes a longing and wistful sentiment as Miranda walks through the home that now houses a new family. "It's real emotional, definitely," says the Lindale, Texas native. "The video is a tearjerker."

Watch 'The House That Built Me' video below.