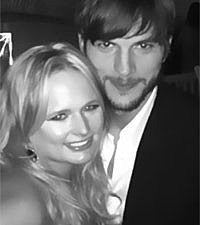 I'll Have Another wasn't the only big winner at this weekend's Kentucky Derby. At a pre-race Barnstable Brown Party on Friday night, Miranda Lambert ended her feud with Ashton Kutcher, whom she'd accused last month of mocking country music.

"@aplusk here it is y'all," Miranda tweeted, including a photo of herself with the "Two and a Half Men" star. "He is sweet and lives country music! For real!:) and he likes randaritas!"

Randaritas, for the uninitiated, are low-cal adult beverages Miranda makes with Bacardi, Crystal Light and Diet Sprite. No word on how many glasses the pair knocked back, but it was evidently enough to convince the country star that Ashton meant no harm at last month's ACM Awards, where the actor donned cowboy garb and sang George Strait's "I Cross My Heart."

"Was Ashton Kutcher making fun of country or is it just me?" Miranda tweeted soon after, but evidently, it was all one big misunderstanding.

Should Ashton now become a good buddy, the only thing the country songbird will have to watch out for is the inevitable bromance with husband Blake Shelton.