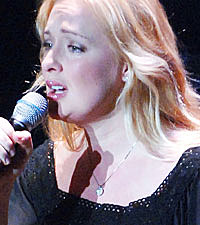 It's been more than two months since Mindy McCready took her 5-year-old son, Zander, away from his grandmother, Gayle Inge (who is also his legal guardian). The troubled singer fled Florida, leading police on a hunt first to Tennessee and then to Arkansas, where she was eventually found with her son hiding in a closet in her boyfriend's home. The little boy was then placed in foster care, where it appears he will now stay while the case continues to wind its way through the court system.

In recent developments, the Arkansas social service agency handling the matter has requested that the custody case, which is currently in Florida, be transferred to their state so they can better handle the legal proceedings. Mindy requested that her son remain in Arkansas, while the boy's father, Billy McKnight, who is also fighting for custody, asked that Zander be returned to Florida.

According to TodaysTHV.com, a Florida judge ruled on Wednesday (Feb. 22) that he will retain jurisdiction over the case, while allowing Zander to remain in his current living situation in Arkansas until further details can be worked out.

While this is a disappointment for Billy, the social service agency in Arkansas has suggested they may pay for some of his travel expenses, so he can afford to visit his son once a month -- a decision that is causing some controversy within the state.

Meanwhile, Mindy has complied with the judge's order to complete parental classes. The the 'Ten Thousand Angels' singer, who has had multiple stints in rehab, has also passed all of her drug tests since the incident in December.

The 36-year-old singer, who is pregnant with twins, hopes to be able to live with her son and be his full-time parent someday. "I have vigorously gone out and tried to learn from my mistakes and tried to better myself in every way possible," she told ABC's '20/20.' "There's nobody that wants to be better at being me than me."

Filed Under: mindy mccready
Categories: Country News
Comments
Leave A Comment
Back To Top
Story Behind the Song: 'If I Didn't Love You'