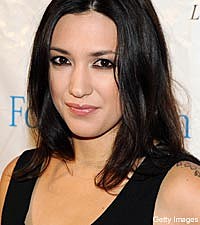 To say that Michelle Branch is anxious to release her new solo project is probably an understatement. 'Everything Comes and Goes' has been finished for more than two years. Michelle sold a six-song EP of the upcoming project at some of her recent shows, but she's now asking her fans not to buy it.

"Please people, DO NOT buy my EP on Ebay!" Michelle posted on her Twitter page. "There will be physical copies as well as digital for sale any moment!! I'd give you all the release date but WB [Warner Brothers] won't tell me! No one ever tells me anything."

Michelle says her frustration is not with the people at the label as much as it is with just the process. "I have friends at WB who I love and have nothing to do with this," she adds.

There is a silver lining for the Grammy winner.

"As you know, even though 'Everything Comes and Goes' has technically been finished for two years now, I've continued to write through the entire process," she says on her website. "In fact, sometimes writing was the only comfort for the frustrating situation I was going through. So now here I am with over 20 songs that I am extremely attached to. What's a girl to do? Well, as a 'thank you' to my fans for being (or at least trying to be) patient, I'm releasing ALL the songs. 'Everything Comes and Goes' will now be released as a 6 song bonus album both digitally and at retail."

With no official release date, Michelle asks her loyal fans to be patient just a little longer. "I'm reluctant to give you any details as to when the full album and bonus album will be coming out because as we all know these dates change," she says. "I know a lot of you are frustrated because the music is out and unless you go to a show, you're unable to hear it. Believe me, I feel the same."

Hoping to have the new music streaming on her website any day now, Michelle is currently performing several dates as an opening act, along with Will Hoge, on Sugarland's Incredible Machine tour. Click here for dates.