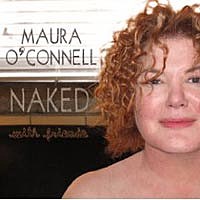 Irish-born singer Maura O'Connell has always had a steady stream of musical compatriates assisting her on record. And her latest album, an a capella collection provocatively titled 'Naked with Friends,' is no exception.

Among the artists joining the Grammy-nominated songstress this time around are Dolly Parton and Alison Krauss, both of whom she has recorded with in the past. Maura's critically-acclaimed disc, 'Blue Is the Colour of Hope' featured Alison, while the following year, Maura contributed harmony vocals to Dolly's 'Slow Dancing with the Moon' album. Other guests on 'Naked with Friends' include Jerry Douglas, Tim O'Brien and Sarah Dugas of The Duhks.

Writers whose work is spotlighted on the eclectic album include folk music mainstay Cheryl Wheeler, and Darrell Scott, who is perhaps best known for penning the Dixie Chicks hit 'Long Time Gone.' Also included in the mix are tunes written by Joan Armatrading and Elvis Costello.

While she neither writes songs nor plays an instrument, making her something of a rarity in Nashville, Maura contends that singing really ought to be enough for one to be considered a musician.

"The idea of doing a record like this has been with me a very long time," she tells CMT. "I'm always being asked why I don't play an instrument or why I don't write songs. I've gathered the consciousness that singing should be just fine, that it is a viable talent on its own."

O'Connell, however, isn't "just a singer" -- sharp-eyed moviegoers might recognize her from her brief role as a street performer in Martin Scorsese's 2002 Oscar-nominated epic 'Gangs of New York.'