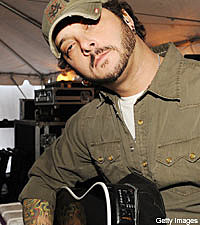 Newcomer Matt Kennon identifies with such fellow country singers as Jimmy Wayne, Jeff Bates and Rodney Atkins, who were either adopted or were at some point in the foster care system. The Georgia native was adopted at birth by two loving parents, who had previously lost three of their four biological children to a house fire.

Matt's birth mother, who already had another son, made a decision to have an abortion, but she arrived at her doctor's office two weeks too late and was told she had to carry the child (Matt) to full term. Matt's adoptive mother had the same doctor, and she was able to take him and give him a loving, stable home. But even knowing he was "chosen," didn't give Matt the peace of mind he was searching for -- he had to find out exactly who he was, and the details surrounding his birth took the singer on a pretty painful journey. "[My parents] always let me know I was their son and they chose me," Matt tells The Boot. "But the older I got, the more inquisitive and the more I wanted to know. I just had to know what my nationality was, and if I had any siblings, things like that. They were just eating at me. I'd just lay there at night wondering, so I had to know, but I wasn't prepared for what I'd find out."

In addition to finding his biological parents, Matt also found his brother, as well as a few unsavory details about what nearly happened to him as a baby. "I had a father and a mother who had been married once, got divorced ... my father was re-married, went back [and] my mother got pregnant," states Matt. "I have umpteen half brothers and sisters from my father, and my mother was just badly damaged and pretty dysfunctional, and she pretty much imprisoned herself and wouldn't talk to anybody. So, she had let herself go. I'd found out that both my mother and father had both been homeless. I had a brother who was selling drugs to support my mother who couldn't work. She was disabled. So, that was what I had found out. And that my father had tried to possibly do a black market adoption with me."

Matt explains that his biological father tried to sell him for $10,000 to an attorney, who was later disbarred.

So, 'The Call' singer took it all in, and how did he deal with it? "It gave me the drive to succeed and let them know I was more than just a price tag," Matt explains. "But there's just so much more that went along with that. The last words my mother ever told me was that she wished she wouldn't have had me because she wasn't prepared to deal with this. And I never spoke to her again. Twelve years went by, and I found out a week after she passed away. And I had to disassociate myself that she wasn't my mother. So, I refer to them as my 'illegitimate parents.'"

Matt realizes that despite his beginnings, he's pretty blessed. "I've only got a mom and a dad and they're both alive and well, and they've always been there and they always will be there."

Matt is riding the country charts with his poignant debut single, 'The Call,' and is currently putting the finishing touches on his first album, which is due to hit stores later this year.