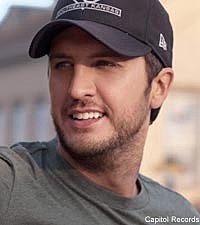 Luke Bryan says that since the birth of his son, Bo, now 20 months old, his outlook, not only on life but on his career, has changed drastically, making the Georgia native focus more on what is expected of him.

"[Being a dad] makes me kind of concentrate a little more," Luke tells The Boot. "Really keep my eye on the ball and understand that I have a family to support now and have a child to look after. It just makes me want to write a better song and hopefully make my career even better, therefore giving him a better life."

While he admits his songwriting hasn't changed much, Luke does know that will happen at some point when the inspiration triggers an emotional response.

"Some of my songs that I've written since he [was born] refer to being a dad," Luke notes. "Obviously you're going to do that when you're a songwriter. I just think when you're a father it makes you get a sense of real life even more, and hopefully you can put it into a song and make the emotion of that go into a song one of these days."

So what is little Bo's favorite Luke Bryan song? "'Drinkin' Beer and Wastin' Bullets,' ironically," Luke says with a chuckle.

Luke wrote his current single, 'Do I,' with Lady Antebellum's Dave Haywood and Charles Kelley, who, ironically, are blocking Luke from the No. 1 slot on Billboard with their multi-week chart-topper 'Need You Now.'