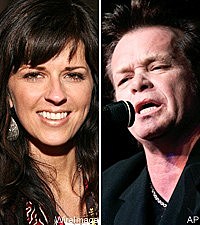 Little Big Town's Karen Fairchild has added her soulful voice to four tracks on rocker John Mellencamp's new album, 'Life, Death, Love & Freedom.' In addition to the first single, 'My Sweet Love,' she is heard on 'Don't Need This Body,' 'For the Children' and 'A Ride Back Home.'

"This record is definitively John, and as a songwriter he is at the top of his game," says Fairchild of the CD, released July 15. "He's as relevant as he has ever been and I'm so happy he asked me to be a part of the record."

Fairchild can also been seen in the 'My Sweet Love' music video, shot recently in Savannah, Ga., and in the 'Life, Death, Love and Freedom' documentary, currently airing on A&E's Biography Channel.

Little Big Town's connection with John Mellencamp goes back to 2006, when the foursome provided harmonies on 'Our Country,' a single from his 'Freedom's Road' album released that year. The group sang on seven other songs from the same CD and were handpicked by the singer as the opening act for his 2006 tour.

On other LBT news, the group has shot the video for their latest single, 'Fine Line,' and are now gearing up to join Carrie Underwood on her 'Carnival Ride' tour this fall. On Oct. 14, Capitol Records Nashville will reissue the group's 2007 album, 'A Place to Land,' with additional new tracks.

Check out Little Big Town on tour
on TourTracker.com