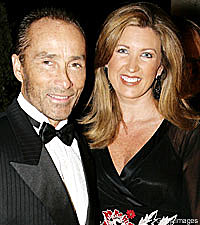 Lee Greenwood is a happily married man. He's been married to former Miss Tennessee USA, Kimberly Payne, for 17 years. Living happily ever after in the fishbowl world of the music business can be a challenge, but Lee, who's on his fourth marriage, says he finally got it right (this time), in spite of the difference in their ages. "She was 24 and I was 49 when we got married," Lee tells The Boot. "We elected to do that before I turned 50. It was a bench mark, but it certainly wasn't a mark of my age."

Relaxing at home in Nashville, Lee explains why he thinks his relationship with Kimberly works so well. "You know, everybody has disagreements. It's usually the small things that become an issue, not the big things. We care for each other a lot. She makes sure that I'm a happy guy, and I make sure that she's a happy woman. It takes a little bit of effort to make sure you think about each other each day when you get up. I just finished talking to her. She's in Kansas right now with her pageant business. (Kimberly directs the Tennessee and Georgia Miss USA pageants for Donald Trump and NBC.)

"I want to tell you, this is the most beautiful woman on the planet. We love each other very much. We shared our first kiss on a USO tour in Scotland the day after Christmas, so when we go back that many years, we think about our past each Christmas holiday."

Lee says that about 75 percent of the couple's day is usually focused around their two sons, ages 11 and 14, "because they require that kind of attention! And then we make sure that we have -- not just a date night, but we have times when we can go out at official functions. She loves to dress up and go out. And as her escort, I'm privileged to do so. Everybody is different in how they treat their mate. We are committed to constant attention to each other, and I think that's how we keep our love alive."

Lee has four other children by previous marriages, but, he says candidly, "Kim is the only woman I've ever loved. I don't say that to make my other wives feel bad. My exes, I don't talk to them. They weren't pleasant divorces. For my childrens' sake, I do respect their mothers however, because they took care of those children when I wasn't there. I'm an active father in this marriage, and I think that's how I've changed and matured. But you search 'til you find someone that you really love. That's the key."

Lee does have a bit of advice he would give to single men thinking of taking the plunge: "Don't just marry frivolously without a great deal of thought. I don't think most men do that. Most men are led into a marriage, and it just took me a lot of years before I ran into the person that opened up my heart and [made me say] 'I love you.' That was pretty tough for me to say for a long time. I was 17 when I was married for the first time. It was hard."

Lee, who has signed with Country Crossings Records, has a new single out called 'Why Lie.' He's currently working on a new album with famed producer James Stroud.