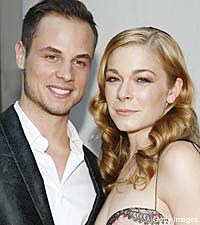 LeAnn Rimes is now officially single. The singer's divorce from Dean Sheremet was finalized over the weekend.

LeAnn and Dean were married in 2002 when she was just 19 years old and he was 21. They separated last summer after rumors surfaced that LeAnn was having an affair with actor Eddie Cibrian, her co-star in a made-for-TV movie. Those rumors did indeed turn out to be true, as the two went public with their relationship shortly after. Eddie is now in the process of divorcing his wife of seven years, model Brandi Glanville.

Us Weekly reports that a divorce settlement was made back in December, but its terms are being kept private.