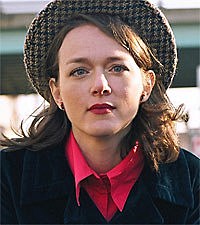 Laura Cantrell will be releasing her new album, 'Kitty Wells Dresses,' on May 17, and the New York-based country-folk artist is offering fans a special preview of the Kitty Wells tribute project with a free download of the title track. The original composition, written by Laura and Amy Allison, serves as a centerpiece for the album, which additionally contains nine songs from the country icon's catalog.

"I've been a Kitty Wells fan since childhood," Laura explains in reference to her country roots. "I inherited my regard for her music from my father's family from West Tennessee."

Laura's admiration for the country legend came full-circle after being invited by the Country Music Hall of Fame to to present a musical program for their Kitty Wells: Queen of Country Music exhibit. The Nashville native rediscovered Kitty's music and focused her energy on recording an album that evokes the honesty and passion of the classic songs.

"While preparing for the Hall of Fame show, I was reminded how great her music is and how wrong it seems that it is not better remembered today," says Laura. "I always responded to the fundamental feeling in Kitty's singing and her way of sounding both emotional and restrained at once."

The end result is 'Kitty Wells Dresses,' a 10-song collection that features a mix of Kitty's signature hits and obscure catalog songs that casual fans may not remember. Laura covers the country standard 'It Wasn't God Who Made Honky Tonk Angels,' and also relives her childhood favorites 'I Don't Claim to be an Angel' and 'I Gave My Wedding Dress Away Today.' Much like her past recordings, the set is receiving impressive reviews from 'Rolling Stone,' the 'New York Times' and the 'Wall Street Journal.'

Laura began her career as a musician and deejay after moving from Nashville to New York to attend Columbia University. She released her first self-titled EP in 1996, but gained wider recognition with her album 'Not the Tumblin' Kind,' released in 2000. 'Kitty Wells Dresses' is the first project from the singer since her 2008 album, 'Trains and Boats and Planes.'

Fans can visit Laura's official website to download 'Kitty Wells Dresses,' and find out where Laura will be heading to promote the project.