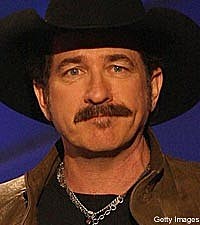 Kix Brooks isn't shedding any tears over the breakup of Brooks and Dunn. While his initial explanation of the split (in an interview with CMT) was jovial, he's now singing a different, arguably more candid tune.

"For a couple of hard heads like us to compromise ... you're constantly giving something up -- way more than you take from a relationship like that, no matter how successful it is," Kix tells GAC. "It's like he's [Ronnie Dunn] got his mind set on exactly what it is he wants to do, what he wants to sing, but Kix has this piece of real estate over here, and I've got to give him some of that. Twenty years we've been doin' that. That's a long time."

Kix and Ronnie both had solo songwriting careers before they were paired as a duo by an executive at Arista Records. Kix says he's ready to revisit the good ole days, taking 100% creative control again. "I'm the first one to say what a great singer Ronnie is," he says, "But hell, I was writing songs for 10 years before I ever met him, and had a lot going on ... He's had to do the exact same thing."

Before embarking on solo careers, the duo will release their final album, '#1s ... and then some' on Sept. 8. They'll say goodbye with a farewell tour early next year, walking away with -- Kix insists -- no hard feelings."We've given, we've taken, and we've made it work," he says. "We've overcome on numerous occasions our egos ... a lot longer than most bands or duos have. I'm really proud of what we've been able to accomplish and all the amazing times that we've had on stage."

You can watch what was likely Brooks and Dunn's final CMA Music Fest performance this Monday (Aug. 31), on the ABC special, 'CMA Music Festival: Country's Night To Rock.' The show will also feature performances by Jamey Johnson, the Judds, Jason Aldean, Trace Adkins, Kellie Pickler and the Zac Brown Band.