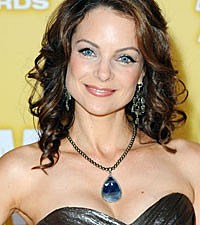 Fans of ABC's "Nashville" will be seeing more of Kimberly Williams-Paisley. The wife of country crooner Brad Paisley, is already familiar to viewers of the drama for her guest-starring role as Peggy Kenter. Deadline.com reports the "Father of the Bride" actress has signed on for more episodes this season, with the possibility of becoming a regular if the show gets a second season.

"Nashville" focuses on the fictional country superstar Rayna James (played by Connie Britton), as well as her husband's (Teddy Conrad, portrayed by Eric Close) mayoral race. Peggy is introduced through a series of mysterious liaisons with Teddy. "There's definitely a lot of history with Teddy," Kimberly tells Entertainment Weekly. "You're going to find out that Peggy and Teddy made some decisions that they shouldn't have made and did some things that they shouldn't have done, and it's going to get them into some trouble."

ABC originally ordered 13 episodes of the Music City-based show, of which Kimberly appeared in six for "a multi-episode arc." Now, Deadline.com reveals that she will appear in at least three of the additional nine episodes that will complete the first season. ABC has not yet announced whether or not "Nashville" will be picked up for a second season, but if it does, there is an option for the mother of two to be elevated from guest-star to series regular.

Fans who tuned into the CMA Awards earlier this month likely spotted the Nashville resident alongside Connie Britton, and show principal Hayden Panettiere (who plays red-hot songstress Juliette Barnes), as they presented Miranda Lambert with the Female Vocalist of the Year trophy. The ceremony, of course, was co-hosted by Kimberly's husband and Carrie Underwood.