It was a case of two worlds colliding in a most unusual place when the Bacon Brothers and actress Shannen Doherty joined the Bellamy Brothers behind bars to film the duo's new video, 'Guilty of the Crime.'

"We spent the day in prison, and it was pretty wild," David Bellamy tells The Boot of shooting the video in Memphis' Shelby County Correctional Center. "'Hustle & Flow' was filmed there. They actually shot part of 'Walk The Line' there, too."

In casting the video, the Bellamys invited Hollywood vixen Shannen Doherty to play the part of the troublemaker serving time. David credits his lovely wife, Susan, with suggesting the 'Beverly Hills 90210' actress for the video.

"A friend of Susan's knew Shannen, and we needed a naughty girl for the cell [scenes]," says David. "It was a great role for her to play. She was perfect. And she's from Memphis oddly enough, which is something we didn't know."

The Bellamys are big fans of the Bacons -- both personally and musically. So they asked Kevin Bacon and his brother Michael to perform 'Guilty' with them.

"It's been about five years ago that we did the bike rally with them," David says of first meeting the Bacon Brothers at the famed motorcycle gathering in Sturgis, SD. "They came over after the show and took a picture on the bus and talked to us awhile."

It was a long, hot day of shooting inside the facility, which houses over 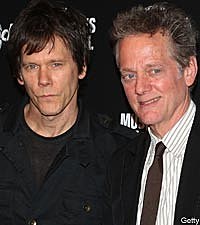 3,500 prisoners. "We saw inmates," says Howard. "Kevin had to go take a phone call, and he walked off down the hall and ended up in an area he wasn't supposed to be. They were all freaking out [saying], 'Get him out of there! Get him out of there!'"

Of course, Kevin Bacon is well-known for such films as 'A Few Good Men,' 'Footloose,' 'Apollo 13' and 'Mystic River,' but the Bellamys say they were equally impressed with his musicianship. "They sent us a couple of tunes, and I would classify them as country rock songs," says David, noting that stylistically the Bacon Brothers' songs remind him of music by Poco or the Eagles. "I think we'll try to cut one of those. Those guys are pretty interesting musically. They are very into it. Michael has actually won an Emmy for soundtrack work."

'Guilty of the Crime' is the first single from 'Anthology,' which will include 13 No. 1 hits and five brand new songs, among them a duet with British pop legend Sir Cliff Richard. The project will be available on the Bellamys' website and via iTunes in late July. The physical album will come out in late September. The Bellamys hope 'Guilty' will get people excited about the project.

"It is a good song and it was great to do it with the brothers," says Howard. "It's the way we've always done. We just record a good song and see what happens. We've had some that have crossed over before; some have crossed under and they land where they land. I think it is a song that could fit into many markets. So we'll just see. Who knows where there might be a home for it? We're just taking a shot. I don't think there are really any barriers for that song."