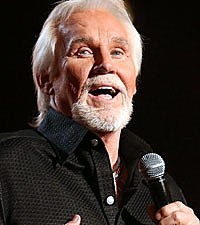 Kenny Rogers is back in the saddle again. The singer revealed last night (May 9) that he will be recording a new album for Warner Bros. Records with producer Dann Huff. The announcement came during the first of Kenny's two nights as the Artist-in-Residence at Nashville's Country Music Hall of Fame and Museum.

"I am very excited about this, and I hope that we are right and people do want new music from me," he told sold-out audience of the Ford Theatre.

"I'm looking forward to returning home to Warner Bros. Records after all these years," he said in a statement regarding the record label he first worked with in 1967. "Our history together, combined with the incredible team that's in place now, provides the catalyst for a great new relationship going forward."

The Hall of Fame's Artist-in-Residence program is celebrating its 10th anniversary, which over the years has included such alumni as Guy Clark, Earl Scruggs, Vince Gill, Connie Smith, Jack "Cowboy" Clement and Kris Kristofferson.

When the singer was introduced to the audience, they were asked to pretend they were in the singer's living room and he was playing just for them. Kenny made that assumption into reality. He was personable and chatty, pausing to tell stories between songs and joke with the audience. Dressed in a white shirt and jeans, Kenny admitted to being nervous because of the intimacy of the event. His seven-piece band was excellent and versatile, playing everything from a flute to mandolin while accompanying the singer.

The Houston native chose "Something's Burning" to open the evening, followed by "Reuben James," before stopping the music. "I am flattered, and I appreciate being invited here tonight," he admitted. "I have to tell you, I'm so out of my comfort zone."

The evening followed the evolution of his career, beginning with his high school band. Kenny then played jazz for 10 years in the Houston area before turning to pop music and then country.

"Mickey Newbury, who was a wonderful songwriter, and I went to to high school together and he wanted to be in my band, the Scholars," Kenny recalled. "I told him he couldn't be in it because he couldn't sing or play an instrument. He went home and over the summer learned to sing and play guitar. When he came back to audition he was too good to be in the band!"

Mickey went on to write "Just Dropped In (To See What Condition My Condition Was In)," and years later, after moving to Nashville, he played the tune for Kenny, who was with First Edition at the time. "He played me the song and I said I wanted to cut it," Kenny remembered. "He then told me he couldn't let me have it because Sammy Davis, Jr. had it on hold."

When Davis didn't cut it Mickey gave it to Kenny and it became a huge hit for the band. "This is as close to psychedelic you're going to get all night," Kenny said as a huge screen dropped down to play a video of him and First Edition performing the song, while he sang it live.

Kenny also performed a couple jazz tunes, including "Walkin' My Baby Back Home" and "When I Fall In Love." He told the crowd, "My first live performance was at the Texan Theatre, where I sang 'Lovesick Blues' and won the contest. Eddy Arnold was the judge."

The lover of music explained his songs as one of two things: making socially significant statements; or love songs that portray what men want to say and women want to hear. The songs he sang the rest of the evening proved the truth in his words. He worked his way through hits including "Ruby (Don't Take Your Love to Town)" and "She Believes in Me," declaring the latter to be one of his favorite songs.

Growing up, Kenny's dad played fiddle, and his father's brothers and sisters all played an instrument, as well. The crooner shared how his family would often get together and play music, including gospel numbers.

"People had asked me to do a gospel album for years and I was always hesitant," Kenny said. "I have always thought myself more spiritual than religious, although my mom was as close to a religious fanatic as you can get. We went to church three times a week. I finally agreed to do a gospel album a few years ago, and I cut a song that Vince Gill wrote that I just love. I have a surprise for you tonight; I've asked Billy Currington to come out and sing it with me."

Billy joined Kenny for "Standing on the Rock of Your Love," to the delight of the audience. As he left the stage Kenny shook his head, commenting, "How can he be that young and that good?"

Among the other tunes he sang were "Love the World Away" and "If You Want to Find Love" before inviting Billy Dean out to join him on "Buy Me A Rose." Before leaving the stage, Billy said, "I have to say I would not have a career without Kenny Rogers. He was an inspiration to me, and Billy Currington said the same thing backstage."

Kenny introduced his wife, Wanda, who was in the audience, then sang a song for her and their 8-year-old twins, Jordan and Justin. "They say when you have kids at my age it will make or break you," Kenny explained. "They have so much energy. Mike Reid wrote this song and it so perfect to sing to introduce you to them." A video of the twins at various ages played while Kenny sang "To Me."

The hits kept coming during the two-hour show. "Lucille," "Lady" and "The Gambler" were sung back-to-back, with Kenny stopping long enough to tell the story of how he found the Lionel Richie tune "Lady."

"I was in Las Vegas and asked Lionel to play me a song, because I liked what he was doing with The Commodores," he shared. "At first, he was reluctant to play something for me until I told him it would be on a greatest hits that would probably sell four or five million albums. Then he came over and told me the Commodores had rejected the song he was going to sing me, and then he proceeded to sing me one word ... Lady. I told him I didn't see how they could reject a song like that, so I agreed to record it. When the day came for the recording session there was only one verse to the song. I found out Lionel was writing the second one in the bathroom at the studio. But this has been a wonderful song for me."

After singing the duet he recorded with Dolly Parton, "Islands in the Stream," Kenny invited Billy Dean to come back out to join him on "Sweet Music Man," a song he said was inspired by a conversation he had with Jessi Colter about Waylon Jennings, where she called Waylon her 'sweet music man.'

"The first part of the song is about Waylon but the second part is about me," he confessed.

Tonight (May 10), Kenny will perform his second sold-out show in the series.