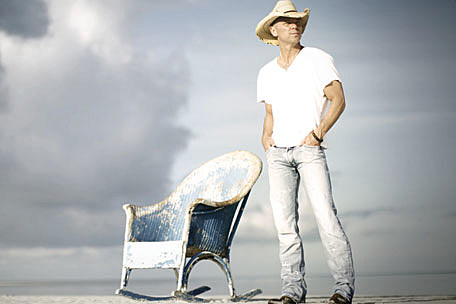 Kenny Chesney is launching his own line of rum. The country music superstar, who has been very vocal about his love for island life and a great cocktail, created Blue Chair Rum with a master blender from one of the Caribbean's oldest distilleries. "Anyone who knows me knows I've drunk a lot of rum in a lot of places," Kenny explains. "And the more you drink, the more you know what you wish you could have. I finally decided there was no reason not to ... All I had to do was decide once we started tasting what that flavor that truly felt like the end of the day in the islands was." The rum, which will be available in May, comes in Premium White, Coconut, and Coconut Spiced.

Luke Bryan is king of the charts again. The Georgia native's latest album, Spring Break...Here to Party, has secured the No. 1 spot for the second week in a row on the country albums chart, and also lands at No. 3 on Billboard's all-genre chart. "We're proud that we started a little idea and that it's grown into something," he says. "We just felt that it was time to put a physical CD together that people can go purchase in all kinds of all environments."

A public memorial service is scheduled for Opry legend Jack Greene, who passed away on March 14 at the age of 83, due to complications from Alzheimer's disease. The "Statue of a Fool" singer will be remembered with "A Celebration of Life and Love" service at Nashville's Ryman Auditorium Wednesday, March 27, at 11 AM CT. Vince Gill, Lorrie Morgan, Gene Watson, Ricky Skaggs, the Whites and several other musical guests will pay a musical tribute to the country music icon, while Jeannie Seely is among the list of guests who will deliver a eulogy.

Rascal Flatts is hitting the road this summer, the group's bassist, Jay DeMarcus announced via Twitter, and they're taking along a few special guests. "Pumped about our new tour!! Live And Loud 2013!! The Band Perry and Cassadee Pope! Gonna be the best, we're working with new show producer!!" he tweeted. No word yet on official tour dates.

Taylor Swift may be criticized for being so open about her relationships in her songs, but the songstress is also receiving plenty of support, including from the creator of the hit TV show, "Nashville," Callie Khouri. "If I could have the kind of backlash that caused me to be No. 1 on the charts for months and months at a time and have sold-out concerts for the next however many years -- that's the kind of backlash I could live with," she says. "If that's what she wants to write about, God love her, I support it. It's obviously speaking to the audience she's trying to reach." [Huffington Post]