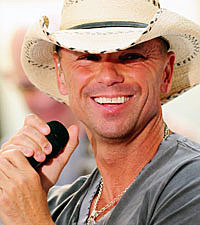 Kenny Chesney has set April 30 as the release date for his yet untitled new album on the Blue Chair/Columbia Nashville Records label.

"It's gonna be an amazing summer and I'm really excited to bring some new music to No Shoes Nation," says Kenny, whose recently announced No Shoes Nation tour gets underway March 16 with a show in Tampa, Fla. "The fans are the foundation of No Shoes Nation. They built it from the ground up, and they built it with heart, passion and the love of life and music. I can't wait to feel that connection again throughout the summer of 2013."

The east Tennessee native, who reigns as the biggest ticket seller in country music, will have performed 101 stadium concerts after this summer's tour. To date, he has scored 24 No. 1 singles and sold more than 30 million albums.

The new album is the follow-up to Kenny's 2012 Welcome to the Fishbowl, which became the superstar's 11th No. 1 country album on the Billboard chart. To date, that collection has sold nearly 600,000 copies.