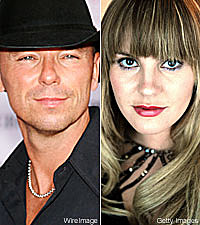 Here's a collaboration sure to be a little bit country and a little bit rock 'n roll. Kenny Chesney and Grace Potter are planning a duet for the country superstar's next album.

Grace confirmed the musical partnering to ABC's 'Good Morning America' just before she and her band, the Nocturnals, played ''Tiny Light,' a song from their self-titled album that recently debuted at No. 20 on the Billboard Top 200 chart.

"Chesney -- I call him 'the Chez' -- he is putting out a record and somehow heard about me while floating on his boat down in the Virgin Islands," Grace told GMA. "So we're gong to do a duet together."

A Vermont native, Grace also announced that she has partnered with a company in her home state -- Lake Champlain Chocolates --for another tasty collaboration. She worked with the chocolatiers to create a dark chocolate candy bar that combines red pepper and pistachio.

Grace Potter & The Nocturnals' next summer tour stop is tonight, June 17, in Cincinnati, Ohio. Kenny's next concert is July 2 in Las Vegas, Nev.