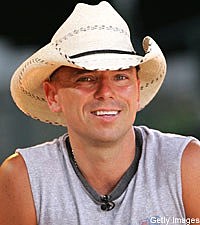 Kenny Chesney is in talks with Constellation Spirits to develop his own brand of premium rum. Company executives say the liquor is a perfect fit for the country star, who is looking to expand "the Chesney brand."

Chesney's new, yet-to-be-named rum won't hit liquor stores until 2010. Though his image won't likely be featured on the bottle, he's expected to endorse the product and maybe even write a song about it.

Chesney is one of many celebrities to tie their name to a liquor. Sammy Hagar has his own tequila; Sean 'Diddy' Combs has a stake in Ciroc Vodka; Jay-Z has his own champagne, and Donald Trump markets Trump Vodka.