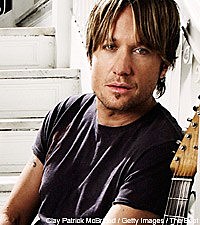 Keith Urban is sticking to the musical formula that's resulted in more than 12 million albums sold, 19 Top Ten singles and countless die hard fans. He's just doing it now with an even bigger smile on his face. The 41-year-old country superstar's sixth studio album, 'Defying Gravity,' is full of the hook-laden, feel-good music that's garnered him so much success over the past decade. But this project is undoubtedly more euphoric, reflecting more than ever Urban's personal life.

It's that life at home in Nashville where the Aussie crooner has found a greater sense of peace and happiness. But while Urban bears his heart on his musical sleeve, the husband to actress Nicole Kidman and dad to baby daughter Sunday is notoriously soft spoken about matters of the heart. He'd simply rather you come to your own conclusions by listening to his songs.

Urban visited our studios to perform three new tunes from 'Defying Gravity,' plus a beautiful old favorite, at our special request. The star was in a great mood as he dazzled our staff with his infallible voice and mad guitar skills. (Watch his live performance here.) He also sat down for an interview with The Boot to talk about old regrets and new hope.

The words "defying gravity" are in a line from the song, 'If Ever I Could Love,' but how did you decide on that for the title of the album?

The title for the album came at the very end of the record. I was trying to find a title that really fit the spirit of the album. It's a very up-record, about love, optimism, hope and rising above. When those two words came by -- defying gravity -- I thought that was a great metaphor for the power of the human spirit, as well.

The first two singles have been feel-good, uptempo songs -- 'Sweet Thing,' which went to No. 1, and 'Kiss a Girl,' which is poised to do the same. Do you think people are craving happier music these days?

Now is a good time for that for sure. Positive energy is always good. But it's part of what I've always done. I tend to gravitate towards hope. Even in the down periods, I always gravitate towards the little bit of light that might be there.

What is the most personal song on the album?

That would be track 11, a song called 'Thank You.' That one is particularly intimate. 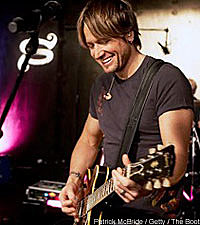 'Why's It Feel So Long' talks about missing someone even after they've only been gone a half-hour. That song must especially hit home for you now that you're a dad ... and a dad on tour.

Yeah, but there will be some shows where I'll bring my family out. Having them on the road brings it all together, gives it a good purpose.

So have you baby-proofed the tour bus?

There's a natural place where, as a writer, I'm going to write about things that are personal to me, so that they find themselves within the outlet of music. The difficult thing comes in people wanting to have that elaborated upon. There's a certain place, like in the context of that song -- there it is. That's it.

Nicole had a big hand in convincing you to cut 'Stupid Boy' on your last album. Was she a cheerleader for any of the songs on this one?

There's a song that I covered by Radney Foster called 'I'm In.' It's on a record that came out years ago, which also had a song called 'Raining on Sunday,' that I [also] covered. I made a compilation CD that we would listen to in the car. Every time that song came on, we both loved it. I was telling her that I was thinking about recording it and she supported that.

'Stupid Boy' was on the 'Love, Pain and the whole Crazy thing' CD, which had great success. So we were surprised to read a quote from you in the New York Times, where you expressed disappointment in the album. You said, "I feel like I failed making that record ... I was left angry at myself for losing focus." What exactly do you regret about that album?

Unfortunately, things get taken out of context. That record for me ... I was trying to take on too many things at the time and wasn't in the perfect place to do that. So the record was what it was. And the great thing about art is that it doesn't answer to anything, it just is. It finds its connection with people, and that record certainly connected with a lot of people. In hindsight, I am really grateful for it. There is a lot of experimentation musically that I undertook on that record ... which allowed me to really focus on this record to bring things that wouldn't have been there had it not been for that one.

You had your first chart-topping song in 2000 with 'But for the Grace of God.' Nine No. 1's later, is it still the same level of excitement?

Definitely! It's a monumental feeling to get to the top of the charts. Especially now, there's so many records out. With 'Sweet Thing,' I was really relieved, too. 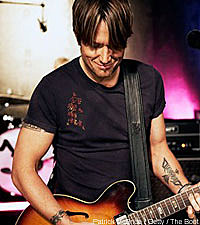 Of all the career milestones you've had, what was the first accomplishment where you thought, "OK, now I've really made it"?

Making the first record, and then hearing the songs on the radio. Every artist that I've ever met, in country particularly, they just want to hear their songs on the radio. I grew up listening to the radio and loving it, and wishing I could get some songs on radio. So that feeling is exactly the same as it ever was.

Congrats on your ACM win for Vocal Event of the Year, for 'Start a Band' with Brad Paisley. That was an industry-voted category, while Entertainer of the Year is fan-voted. Do you have a preference when it comes to who gets to vote?

It is great that the fans get a say. Particularly with the Entertainer, because for me, it's about going out and putting on shows, entertaining everybody. All the fans get to go and see multiple shows throughout the year. So it is terrific that they get a chance to tell us which ones they're moved by.

We've seen you play guitar backing other famous musicians at a lot of awards shows, from Al Green at the Grammys to Brooks and Dunn at the CMAs. Would you ever consider, maybe later in life, starting a band?

Well, I've been in a band. And I have a band. I need a band! [laughs] It's fun as a guitar player to sit in with other people, to just sit back and play.

Speaking of your former band, the Ranch, do you ever miss those days when you had a fan base but you could still walk around New York and L.A. without paparazzi following?

We did have a fan base with the Ranch, and I'm glad that guy keeps coming out to the shows. [laughs]

But do you ever miss your anonymity?

I don't really think about it. I think particularly in Nashville, it's a real lifestyle for us. We do all of the normal things and don't get bothered.

Do you see yourself someday dabbling in other genres of music?

I have no idea what the future holds. My foundation is really country. That's where I come from. But I am very much drawn to where that can go. Even Waylon Jennings and that classic song, 'Don't Think Hank Done It This Way' ... in that song he says it's the same old tune, fiddle and guitar. Where do we take it from here? And that sums it right up for me. That would probably be a strong philosophy musically, for where I am.