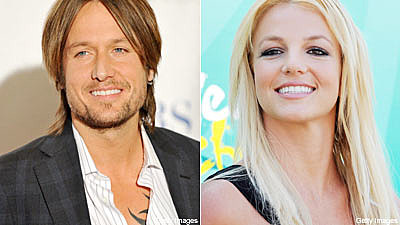 Keith Urban, who took home the trophy for Favorite Country Male Artist at the American Music Awards in November, was asked backstage what one song he could dance to for the rest of his life.

"Britney Spears's '3,'" the Aussie reveals in the latest issue of InStyle magazine. "It has an unbelievable production and arrangement, and she sounds killer on it."

Other artists weighed in on their favorite dance-floor grooves. American Idol alum Adam Lambert says "'Boom Boom Power' by the Black Eyed Peas. Because it's got that great booty bass!"

Latin sensation Shakira says it's "'Bad Girls' by Donna Summer, the first track that I listened to as a kid. It takes me back and brings me such joy!"

Keith may be country's reigning Favorite Country Male Artist, but he appreciates music of all genres. Recording a duet with Nelly Furtado, as well as collaborating live with Timbaland, the talented singer also sang 'Kiss a Girl' with American Idol winner Kris Allen for the show's finale last year.

Currently, though, his mind is focused mostly on country music at the moment. Working on his next studio album, the Grammy-nominated singer scored another Top 20 hit with his latest single, ''Til Summer Comes Around.'