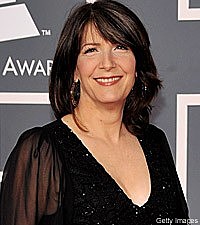 Kathy Mattea says if you want to know about her inspiration, listen to her latest album.
Little did the Grammy-winning singer-songwriter know that when she released 'Coal' in 2008, it would launch something of an adjunct career for her. At the time, she thought of the 11-track CD as a way to pay homage to her family members, friends and neighbors whose lives were centered on mining.
"When I started making the 'Coal' record, I didn't know if I could sing such songs authentically after 20 years of singing commercial music," says Kathy, whose family still lives in Charleston, W.V.

"I had to dig in and strip away who I was as a singer. Technically you can't fudge these; you have to open your mouth and let the song bounce around. It's a very different approach to everything I had done before."

As Kathy wrote and sang the songs about her family, friends and neighbors from mining communities, she also found herself re-establishing a bond with those communities. "Many of the stories in the songs took place just a few miles up the road [from some concert sites]. Playing them there and then talking to the audience is such an intimate experience. I sit in my living room sometimes and think about it and tears stream down my face. It's truly been a highlight of my life."

Kathy prefers to let the audience interpret the songs she sings but will also talk about her grandfathers, both of whom were both coal miners, and her close-knit family that lives in Charleston. Stories of working for weeks without seeing the sun, of building a home by hauling scrap lumber for miles after more than 12 hours working in the mine, and of sewing thick, leather straps onto the backs of shirts to expedite rescue are just some of the tales she and audiences share.

"Mining communities are among the last places in our country where the culture is really preserved," Kathy says. ""It's a push-pull. The more the media comes into our lives, the more we realize there is a world beyond that ... but coal gives you a deep sense of identification. If you're not going to college, coal is the best way to make a decent living and people are glad to have it."

As she became more involved in mining issues, Kathy trained in the Al Gore project supporting the concepts of the anti-global warming initiative 'An Inconvenient Truth.' She now gives presentations about global warming and mining's effects on the environment.

"Sometimes I do them in conjunction with a performance, other times I just give the presentations," says Kathy, noting her pleasure as one of her first presentation turned into a lively discussion with the audience at Vanderbilt University in Nashville. "To be in your late 40s and get this challenge, it makes you rethink what you do. This is all just all a huge, unexpected gift."