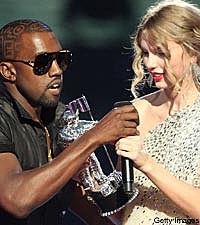 Kanye West has taken his foot out of his mouth and is now trying to make amends. The rapper wrote a rambling apology on his blog Sunday night, after rushing the stage during Taylor Swift's VMA Awards acceptance speech, and then promptly being kicked out of the show. But he took down his apology post just a few hours later. Now, perhaps sobered up, Kanye (who was seen swigging a bottle of liquor throughout the night) is issuing a new apology:

"I feel like Ben Stiller in 'Meet the Parents' when he messed up everything and Robert De Niro asked him to leave," Kanye writes on his blog. "That was Taylor's moment and I had no right in any way to take it from her. I am truly sorry."

Sunday night's apology from Kanye was a little less humble, though still very complimentary of Taylor:

"I'M SOOOOO SORRY TO TAYLOR SWIFT AND HER FANS AND HER MOM," he wrote in a post that is no longer on his blog. "I SPOKE TO HER MOTHER RIGHT AFTER AND SHE SAID THE SAME THING MY MOTHER WOULD'VE SAID. SHE IS VERY TALENTED! I LIKE THE LYRICS ABOUT BEING A CHEERLEADER AND SHE'S IN THE BLEACHERS! ........................ I'M IN THE WRONG FOR GOING ON STAGE AND TAKING AWAY FROM HER MOMENT!................. BEYONCE'S VIDEO WAS THE BEST OF THIS DECADE!!!! I'M SORRY TO MY FANS IF I LET YOU GUYS DOWN!!!! I'M SORRY TO MY FRIENDS AT MTV. I WILL APOLOGIZE TO TAYLOR 2MRW. WELCOME TO THE REAL WORLD!!!! EVERYBODY WANNA BOOOOO ME BUT I'M A FAN OF REAL POP CULTURE!!! NO DISRESPECT BUT WE WATCHIN' THE SHOW AT THE CRIB RIGHT NOW CAUSE ... WELL YOU KNOW!!!! I'M STILL HAPPY FOR TAYLOR!!!! BOOOYAAAWWWW!!!! YOU ARE VERY VERY TALENTED!!! I GAVE MY AWARDS TO OUTKAST WHEN THEY DESERVED IT OVER ME... THAT'S WHAT IT IS!!!!!!! I'M NOT CRAZY YALL, I'M JUST REAL. SORRY FOR THAT!!! I REALLY FEEL BAD FOR TAYLOR AND I'M SINCERELY SORRY!!! MUCH RESPECT!!!!!"

After Kanye interrupted Taylor's acceptance speech for Best Female Video, the teen country superstar proceeded to dazzle the VMAs with a live performance of 'You Belong With Me.' (Watch it here.) She also got to finish her speech after Video of the Year winner Beyonce called Taylor back on stage.