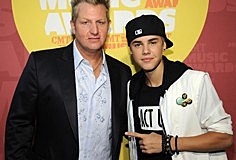 "I'm really glad to be here," Justin proudly told CMT, with Rascal Flatts at his side. "It's great. It's so many people my mother admires, because she loves country music and I do too!"

The dynamic pairing between Justin and Rascal Flatts resulted in 'That Should Be Me,' a song on the teen star's 'Never Say Never: The Remixes' album, with the accompanying video subsequently taking home the CMT Music Award for Collaborative Video of the Year.

While the pop prince is taking a break from the road, his country big brothers are currently gearing up for Flatts Fest, which kicks off June 18 in Bristow, Va. Click here to for Rascal Flatts tour dates and tickets.