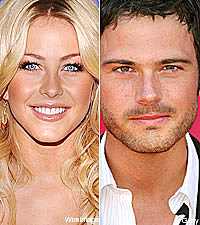 Julianne Hough, already gearing up for a new partner on the upcoming season of 'Dancing With the Stars,' is getting cozy with a new partner in real life, too: country star Chuck Wicks.

"It's very difficult to date. I just got kind of lucky!" Hough tells PEOPLE magazine of her new relationship with the 'Stealing Cinderella' singer. "He's just a great guy! He's awesome and really, really talented ... I'm having a great time getting to know him."

The 20-year-old Hough ended an engagement to fellow dancer Zach Wilson last year. Wicks and his longtime girlfriend -- the subject of 'Stealing Cinderella' -- reportedly broke up just before the Brad Paisley tour. It was on that tour that sparks flew between Hough and Wicks, both opening acts on the bill.

Hough has had to park her tour bus to start filming the next season of 'Dancing With the Stars' in Los Angeles. But she's confident that she and Wicks will keep the long distance flame burning.

"That's what's cool about being with an independent person," she says.