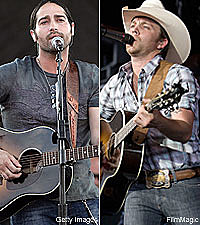 Before hitting the road on Brad Paisley's H2O tour, Josh Thompson and Justin Moore were good buddies who enjoyed writing songs and hunting together -- something that the two have not had much time to do with their recent busy schedules.

"I'll speak for both of us, as much as we can hunt or fish [while on this tour] we will," Josh tells The Boot. "But I don't think this summer is going to be a lot of time for any of that. We'll probably get together and write some songs and definitely hang out. Being able to hang out with him on this tour has been a good time."

On a recent H2O tour stop, Justin even jumped up on stage with Josh to help him out with 'Beer on the Table.'

"We really got to know each other last year," Justin explains. "At the end of the year, we did two or three shows together in a matter of a couple of weeks. It was just a blast. [This summer] we'll probably end up on each others bus going to the next venue, drinking beer and writing songs."

Both Josh and Justin have high hopes that after the H2O tour winds down, the two can hit the road together on a tour of their own. "If you listen to both of our records, there's a lot of similarities between the two," Justin continues. "It's more old school country with the same kind of theme running through them. We became really good buddies through that. Our shows are really similar, too. Who knows ... in the future we may have to do a whole tour together!"

Until then, Josh and Justin will soak up all the joys of being involved with a major tour like the one they are on now. "This one is just so high scale," Josh says of the H2O tour. "There are so many working parts, yet everything manages to come together. The talent lineup is great. I love everybody out there. It's exciting. It's going to be a great summer. I can't wait to get all the kinks worked out and have some fun."

"It's going to be really cool and spontaneous for the fans," Justin adds. "Brad's always thought outside of the box. This tour is just another example of that with the Water World Plaza Stage. It's a lot of fun for us and the fans."