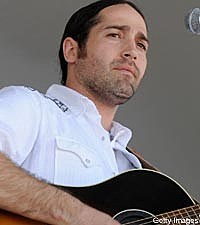 Like most of Nashville's hottest stars, newcomer Josh Thompson hit the Vegas strip this weekend in preparation for the 45th Annual Academy of Country Music Awards. Saturday afternoon (April 17), he performed at a private event at Nellis Airforce base for U.S. troops.

While Josh is a bit too new to the scene to be nominated for Best New Artist this year, all signs point to him scoring the nod next year with the breakout success he's had with 'Beer on the Table' and his latest single, 'Way Out Here.' So if he does get the nomination at the 2011 awards show, who does Josh think his competition will be?

"That's a tough one," Josh tells The Boot. "It's weird how they pick those sometimes. Sometimes you have two or three records out before you get that nomination, but if I do get it next year, I'd say I'd be up against guys like Justin Moore and Randy Houser."

Filed Under: Josh Thompson, JoshThompson
Categories: ACMs, Exclusives
Comments
Leave A Comment
Back To Top
Story Behind the Song: 'If I Didn't Love You'