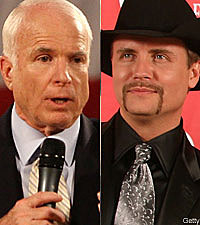 Rich had the opportunity to meet McCain at the dedication of the U.S.S. Intrepid Museum in New York. After the country star introduced himself, he says McCain humorously responded, "Like I don't know who in the hell you are."

On the non-political front, Rich is currently serving as a judge alongside Jewel and Jeffrey Steele on NBC's reality-talent show, 'Nashville Star.' He's also celebrating Jewel's recent spot at No. 1 on the album charts, as he produced the CD.