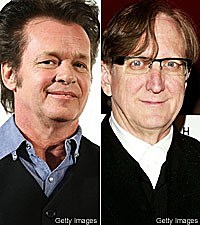 John Mellencamp is going old school with an old friend on his 25th album.

The Grammy-winning rocker turned, once again, to Oscar-winner T Bone Burnett (who also produced his 2008 CD, 'Life, Death, Love and Freedom') to collaborate on the upcoming project, titled 'No Better Than This.' The album was fittingly recorded while John was on the road with legends Willie Nelson and Bob Dylan. Using the old-fashioned method of one microphone and a 55-year old reel-to-reel Amex tape recorder, John opted to record in three historic sites -- Sun Studios in Memphis, Room 414 of the Gunter Hotel in San Antonio, and the First African Baptist Church in Savannah, Ga., which was the first black church in America. The locations, he says, were crucial for the album.

"This is my 25th album," he tells Billboard. "I liked the idea that there was a story behind the record other than, 'OK, here's just another John Mellencamp record. So the fact that there is a back story of the Savannah church and the Sun Studios and Room 414... I thought those are all places I would want to visit anyway, wouldn't it be great to just record there?"

With several multi-platinum albums under his belt, the Rock and Roll Hall of Fame member wanted to take his fans on a journey to the music he listened to when his career was just taking off. "All the records that we loved, that we grew up loving, were made that way -- James Brown's records, those first five Rolling Stones records, those early Dylan records," he explains, "You felt like you were sitting next to them and they were playing those songs. That's the quality that music has lost, that technology has taken away from us ... so we got them back on this record. It sounds authentic."

Filmmaker Kurt Marcus also recorded the 'No Better Than This' sessions as part of a movie that John will use to open several theater shows this fall. The concerts will also feature acoustic sets, a solo segment and his typical rock sets. "You'll get three different types of John Mellencamp, and you'll get a movie," John says.

John is also releasing a four-CD box set, 'On the Rural Route 7609' on June 15. The CDs are comprised of 12 unreleased tracks, including the writing demos of 'Cherry Bomb,' 'Jack and Diane' and 'Authority Song,' as well as Joanne Woodward reading the poem 'The Real Life,' and Cornell West's reading of the poem, 'Jim Crow.'

"I have no interest in going back and putting together a bunch of hits," John says, explaining why he omitted several of his biggest hits in the box set. "I had this idea of discovery. I think all of those songs were overlooked... I thought this was just a good way to say, 'OK, so this isn't about hit records. This is about what the rest of these albums were about... Here's really what I do.'"

'No Better Than This' hits stores August 3.