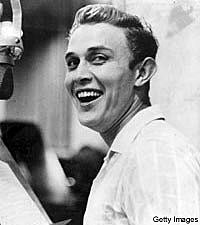 Jimmy Dean, the singer-songwriter, movie and TV star and sausage entrepreneur who died June 13 at age 81, will be laid to rest in a piano-shaped granite mausoleum.

CMT reports that the nine-and-a-half-foot long tomb, which he purchased several years ago at a cost of $350,000, is located near the banks of the James River on the late entertainer's property in Varina, Va. The mausoleum will be inscribed with the epitaph, "Here lies one hell of a man," which is a reference to the lyrics of his 1961 pop-country hit, 'Big Bad John.'

Jimmy's musical ambitions began when his mother showed him how to play his first chord on the piano. He later taught himself to play accordion and harmonica, performing for his first audience while stationed near Bolling Air Force Base in Washington, D.C. in the 1940s. By the '50s, he was starring in the variety series, 'The Jimmy Dean Show,' which aired on CBS and was then picked up by ABC from 1963 to 1966. Among Jimmy's acting roles, he appeared in the 1971 James Bond film, 'Diamonds Are Forever.'

Funeral services for Jimmy Dean are scheduled for Monday (June 21) at Grove Avenue Baptist Church in Richmond, Va. Elected to the Country Music Hall of Fame in February, he was scheduled to be officially inducted in October.