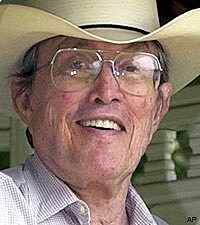 Country music legend Jimmy Dean -- known best for his smash hit about workingman hero 'Big Bad John,' died at home in Henrico County, Va., on Sunday at the age of 81.

The singer's wife, Donna Meade Dean, told the Associated Press that "he had some health problems but was still functioning well, so his death came as a shock." She said Jimmy was eating in front of the television. She left the room for a bit and when she came back, he was unresponsive. He was pronounced dead at 7:54 PM.

Also known for his Jimmy Dean sausage brand, the entrepreneur, who was raised in poverty in Plainview, Texas and dropped out of high school after the ninth grade, went on to a successful entertainment career in the 1950s and '60s that included the nationally televised 'Jimmy Dean Show.'

Jimmy's mother showed him how to play his first chord on the piano. He taught himself how to play the accordion and the harmonica. The future star played for his first audience while stationed near Bolling Air Force Base in Washington, D.C. in the '40s. He and his band, the Texas Wildcats, were a staple on local radio stations by the time Jimmy left the Air Force in 1948.

It was in 1953 that Jimmy gained national stardom with his hit, 'Bummin' Around.' No other single that decade lived up to the success of that song. But in 1961, the ambitious singer had a career resurgence with 'Big Bad John,' a tune about a coal miner who saves his co-workers when a mine roof collapses. 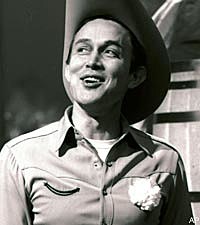 Jimmy was once again a familiar voice on the radio, all the while a very familiar face on television. 'The Jimmy Dean' show aired on CBS in the '50s and was picked up by ABC from 1963 - 1966. Jimmy was also a frequent guest host of NBC's 'The Tonight Show' and had a string of acting credits, most notably playing Willard Whyte in the 1971 James Bond film, 'Diamonds Are Forever.'

The country legend lived in semi-retirement with his wife -- a songwriter and recording artist herself -- on their 200-acre estate just outside Richmond, where he was an avid boater and relished watching sunsets over the James River. Jimmy had reportedly already picked his burial spot near the river.

In 2009, a fire gutted the Dean's home, destroying much of his prized country music memorabilia, including photos of him with Elvis Presley. He was able save his Grammy for 'Big Bad John,' a puppet made by Muppets creator Jim Henson and a clock that had belonged to Prince Charles and Princess Diana. And most importantly, the couple made it out of the blaze unharmed. They had just moved back into their reconstructed home when Jimmy passed away.

In February, Jimmy was elected to the Country Music Hall of Fame. He was to be inducted in October.