In her second in a series of exclusive blogs for The Boot, Jewel gives fans a taste of home. The multi-platinum-selling singer shares an intimate account of growing up on a ranch, along with a look at life on a very different ranch today. She also includes sentimental family photos, ranging from her own father's childhood to today, to help tell her heartwarming story. Read below, in Jewel's own words.

As some of you may know, I grew up on a ranch in Alaska. 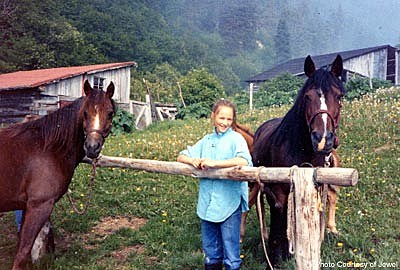 Me getting ready to saddle two of our horses

Well, it is a homestead technically - a piece of land given to my grandparents in exchange for them settling that wild country when it was still a territory in the 1940s. My grandparents came from Switzerland and Germany to escape the second World War and to find a free country for their unborn children to grow up in. My Grandmother Ruth was an aspiring opera singer and she gave up her career to move to the wilds of Alaska. My grandfather was a charismatic and intelligent pioneer who hiked across ice fields with a ladder on his back, which he would lay across crevasses in the ice to serve as a makeshift bridge so he could walk across it, and then place it on his back once again to continue. My grandmother taught all 8 of her children to sing, and they kept themselves entertained with music which helped pass the long work days of clearing that rugged country by hand. My father's childhood pictures look like something out of the 1800s. They took a horse and wagon to town along the beach at low tide, as it was the only way to get into the nearest civilized place. They cleared 300 acres by hand, and brought in hay by hand, stacking it high onto carts pulled by horses. 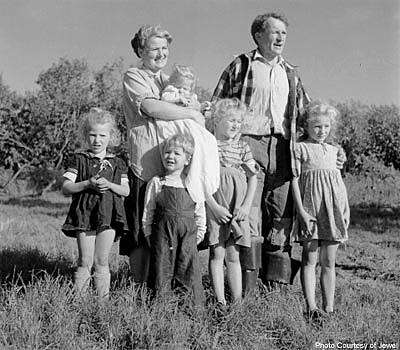 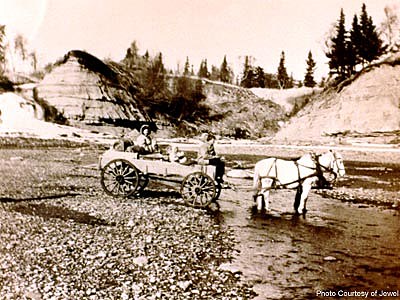 My grandparents headed to town with the kids

I was raised on this homestead, and while I had it much easier than my father's generation, we still worked hard to live off the land. My days were filled milking cows with my brothers, keeping the garden so we could can the harvest in the fall, weeding our immense potato field, cutting the Timothy Blue Grass for hay in the fall, collecting berries to make jams, rounding up our small herd of Herford cattle in the spring and fall, and inevitably slaughtering a few steers to get us through the winter.

Living off the land was part of our life, and I felt so proud that at least I knew what it meant to eat the foods other people enjoy without knowing the sacrifices made. We made all of our own food - butter, milk, bread and jam. We had frozen, smoked and canned salmon, dried herbs and nettles and frozen and canned vegetables as well. To keep us warm we had a coal stove and free coal that ran in black veins along the bluffs. We were poor, but that land let us eat like kings. 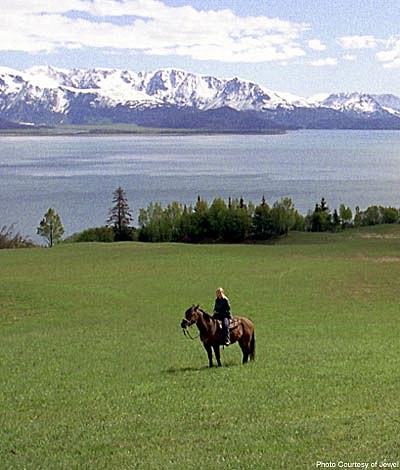 Me in a hay meadow on our Alaskan ranch

My dad still lives off the land mostly collecting his food all summer. I delight in the packages he sends me each year of dried herbs and rose hip jam and smoked salmon. He also makes baskets out of willow roots that are so beautiful. 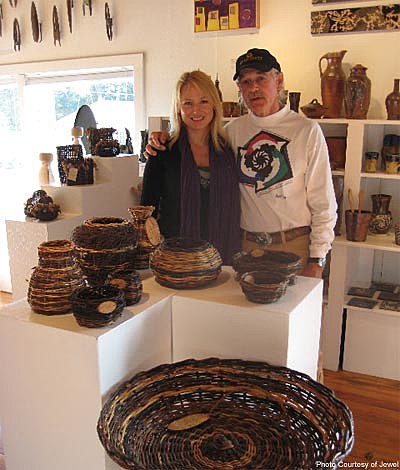 My dad and me with his willow root baskets

He also is a big reason I write songs- to hear a song he wrote "Born To Be A Cowboy" click here. 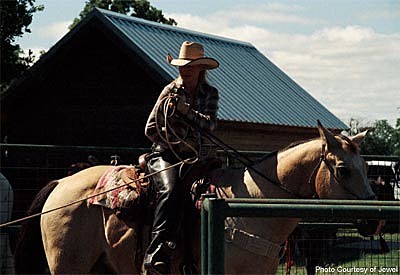 Me dragging a calf

Life on our Texas ranch is much simpler - especially for me. For one thing, we have indoor plumbing, which is nice!!! We also don't slaughter our own cattle. Ty is a great cowboy - part vet, part horse whisperer and part mechanic. If we aren't mending fences, we are doctoring calves, or we are working calves for sprig branding, and if we aren't doing that, he is in his shop working on some part or fixing something or another. But as with any ranch, the cycle of life unfolds before us. 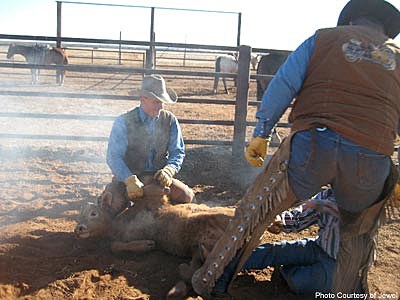 I remember about a month ago we saw a jet black Angus calf by itself. It looked healthy and bright eyed, and we just figured its mother stashed it in a good hiding spot while she ate and would be back, so we left it alone. The next day we saw it off by itself, so we picked it up and took it closer to the herd. We made bawling noises, but no cow came to claim it which posed a dilemma - do we step in and feed it, but risk it not learning to suck and find its mom, or do we leave it alone? We decided to feed it one bottle out in the field, and see if that got it through until it found its mom. The best thing for a calf is its mother's milk. It's critical that it gets the colostrum it needs in those first few days, and nothing can really replace it. We decided to let nature run its course and let that mom care for her baby. 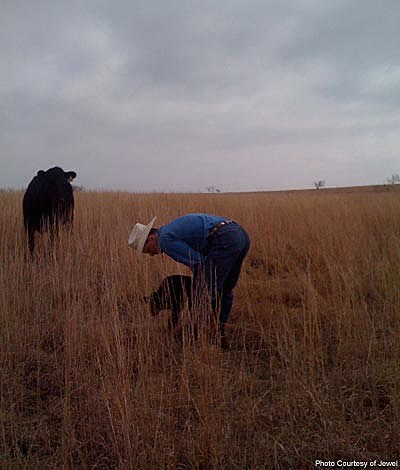 Ty checking an Angus calf to make sure it's alright

We went to check on it the next day, and it was obvious the mom never did come for it. We brought the weak little creature near the house and we bottle fed it, and put it in the shop with a heat lamp so it would stay warm. The next morning we came to check on it and it wasn't looking good. It was skinny and sickly and already smelled half dead. It broke my heart. I wanted to go find its mom and scold her! This poor innocent calf was just suffering. It even rattled Ty. He looked the calf over and said, "Doesn't look good." Then after a pause he added "I wish I could go find that bitch...." (Meaning the calf's mom). Ty is a very tough and macho guy, but he loves animals - probably more than humans. He doesn't hunt really, and he hates to see any animal come to harm. I've seen a lot of ranchers that don't get too bothered by a calf dying, but it touches Ty, and as we loaded up the calf, he was quiet and annoyed. He hated that it would have to be put down.

But that's somewhat of a rare happening on the 'ole ranch. Most days are filled with cute, fat calves and fat, happy moms. The cold hand of winter eventually loosens its grip on the countryside, and the gentle blush of spring begins to blossom and take hold.

I love living on a ranch, so close to the natural order of things. I think it helps keep a person grounded and focused on what's important in life. I am so pleased that the two favorite things about growing up for me - the outdoors and music, are still so present in my life. I am thankful to my Grandmother Ruth for giving up her singing dreams so that she could come to America and try to give those dreams to her children. I am thankful to my father, who put his dreams of national stardom on hold so he could raise my brothers and me, and passed music on to me. My dad still makes records and sings live, (for more info you can go to http://www.atzkilcher.com or if you want one of his albums click here).

My grandmother did live to see me become successful and she took me aside with tears in her eyes and said all the sacrifice was worth it to see her own dreams come true for me. It's an incredible debt we all owe our families who have given so much for each generation to know a better life.

I wrote this song to thank my dad and my family. I hope you can dedicate it to yours as well. (Listen below.) 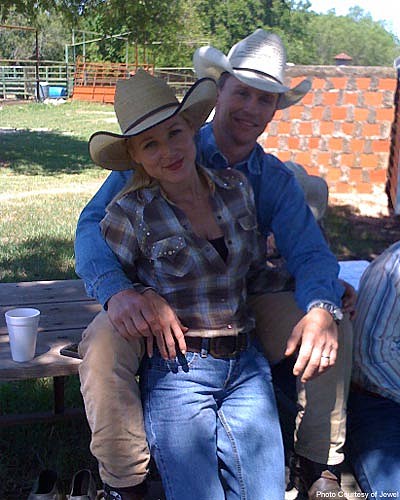 Ty and me after a branding on the ranch

Filed Under: Jewel
Categories: Country News
Comments
Leave A Comment
Back To Top