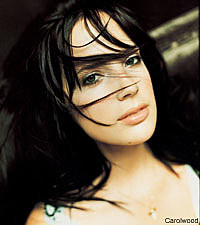 Jessica Andrews has been announced as the flagship artist for Carolwood Records, a new Nashville-based imprint and sister label to Disney-owned Lyric Street Records.

The now 24-year-old Andrews was just 15 when she released her debut album, 'Heart Shaped World' in 1999. She was also named the ACM Top New Female Vocalist that year. In 2001, she hit No. 1 with 'Who I Am.' It's been five years since the release of her last album, 'Now,' which featured the Top 20 hit, 'There's More to Me Than You.' A subsequent album went unreleased when the label was shuttered in 2005.

Lyric Street Records is home to Jessica's boyfriend, Marcel, who has written hits for her and for Josh Gracin, as well. The label is also home to Rascal Flatts, whose Jay DeMarcus produced 'Everything,' Andrews' debut single for Carolwood. The track will be delivered to country radio on November 4.